Andre Greipel made it a hat-trick of Tour de France stage wins on Sunday as he won the 183km 15th stanza from Mende to Valence. 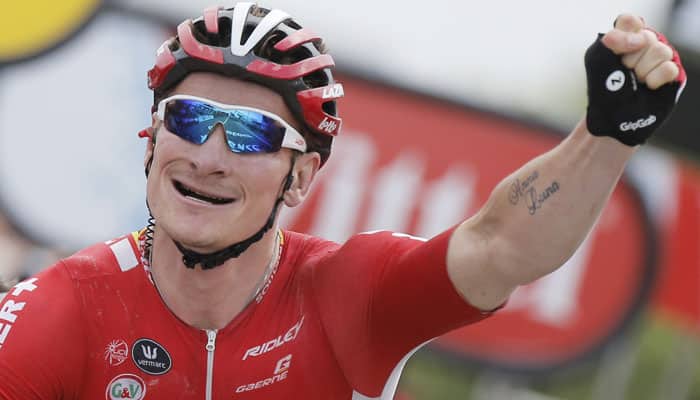 Valence: Andre Greipel made it a hat-trick of Tour de France stage wins on Sunday as he won the 183km 15th stanza from Mende to Valence.

Despite three stitches in his left knee from a crash on Saturday, the burly German fended off compatriot John Degenkolb, Norway`s Alexander Kristoff and Peter Sagan in the sprint finish.

Briton Chris Froome finished safely in the peloton to maintain his overall lead ahead of Nairo Quintana.

Before the 15th stage began, Briton Mark Cavendish, winner of the seventh stage in a sprint finish, had spoken of his desire to have a bunch finale.

And while he got his wish, the 30-year-old had been dropped within the first 10km on a tough uphill start to the race.

He was one of 23 riders to lose touch early on and they never managed to regain contact.

So when it came to the sprint finish, after a nine-man breakaway group was reeled in 30km before the finish, Greipel did not have his main challenger to contend with.

The German never looked troubled as he launched his sprint around 250 metres from the end.

Degenkolb was perfectly placed on his rear wheel with Kristoff behind that, but when they both darted out from behind the Lotto-Soudal rider`s slipstream, neither had the strength to overhaul Greipel.

Sagan, as ever, finished like a bullet but had started his sprint from too far back and trailed in fourth, although he kept hold of the sprinters` green points jersey.

Having already won the second and fifth stages, Greipel, 32, matched his three stage wins from the 2012 edition, taking his total to nine.

With the final stage on the Champs Elysees in Paris still to come, the `Gorilla from Rostock` could well yet better that mark.