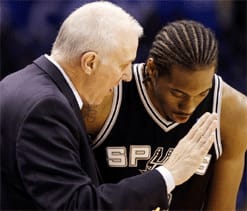 San Antonio: NBA finals MVP Kawhi Leonard says he is withdrawing his name from the pool of players being considered for Team USA at the FIBA World Cup.

"This was a very difficult decision," said Leonard, who advanced to back-to-back finals with the Spurs.

"I want to go out and compete against the guys from these other countries but I need the time to heal and just rest my body from the long season."

"I went through those two seasons going down to June 20," the 23-year-old Leonard said. "That`s tough on your body to keep going.

Leonard was considered a safe bet to make the USA men`s basketball team. He will remain in the national player pool for the 2016 Olympic tournament.

The FIBA World Cup will be take place August 30 to September 14 in Spain.