Former world number one Martina Hingis and rising star Belinda Bencic ended their first time together as a dream doubles team for Switzerland in the Pan Pacific Open second round Thursday. 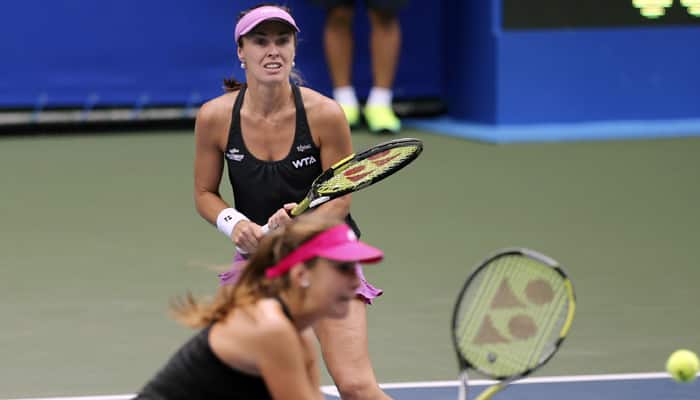 Tokyo: Former world number one Martina Hingis and rising star Belinda Bencic ended their first time together as a dream doubles team for Switzerland in the Pan Pacific Open second round Thursday.

They bowed to the top-seeded pair of Zimbabwe`s Cara Black and Sania Mirza of India 6-4, 6-2 after winning their doubles debut match against Japan`s Rika Fujiwara and Taiwan`s Hsieh Shu-Ying 6-4, 6-2 in the first round.

But the Swiss duo, who have known each other for years despite the nearly 17-year age gap, said they might team up again in WTA events in China in the coming weeks, depending on how Hingis` usual partner Italian Flavia Pennetta recovers from a recent right-foot injury.

Hingis and Bencic broke Black`s serve in the third and seventh games of the first set. But they could not hold their service right after each of the games. They lost their serve in four games in the second set of the hour-long match.

"In the second set, we were falling apart. But in the first set, we definitely had chances," said Hingis, who turns 34 at the end of this month and has won five Grand Slam singles titles and nine doubles titles.

"It was a lot of fun to bring one of the best teams to have to play their best tennis," smiled Hingis, who made her second comeback from retirement in July last year but only as a doubles player.

Partnered by Pennetta, she lost to Russia`s Ekaterina Makarova and Elena Vesnina in the US Open final in New York two weeks ago.

Bencic, 17, currently ranked 34th in the world and who reached the US Open singles quarter-finals in only her fourth Grand Slam appearance, said: "It was fun to play with Martina."

"If we have used the chances, maybe we`d look a little bit different. A bit unlucky as I made some stupid mistakes."

Hingis said earlier Bencic was just four years old when she first met her. Her mother Melanie Molitor has trained Bencic for 10 years along with the youngster`s father Ivan.

Recalling the "momentum and challenges here and there" in the match, Hingis said: "To be on the same side with Belinda, I really enjoyed it. Hopefully we`ll do better."

Hingis is ranked 20th in the world doubles ranking and Bencic 255th.

Both of them will compete at the top-flight $4.5 million China Open starting in Beijing on September 29 and the low-tier $250,000 WTA event in Tianjin in the week of October 6. Hingis is also booked for another WTA event in China -- the Wuhan Open next week.

About another possible pairing with Bencic, Hingis said, "It depends on how we are going to do with Flavia (Pennetta) in the next two tournaments in China."

"There is Tianjin, so that would be another possibility."