From Nepal to Peru, no-hopers inspire in Sochi 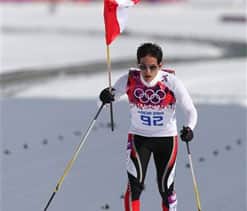 Sochi: Struggling alone on the tracks long after the leaders finished but never giving up, heroic Olympians from Nepal to Peru again showed that it`s the taking part that counts.

The time trial event in the cross country, with large fields and individual start times, is traditionally the moment in the Winter Olympics where athletes from lesser known ski nations have their chance to shine.

And so it was in the men`s 15 km cross country classic style time trial at Sochi, a gruelling race against the clock made particularly tough by hot temperatures and agonisingly slow snow.

The never-say-die performances of athletes from nations such as Nepal, India and Peru became almost as much of an attraction as the dominant power of the race winner, Dario Cologna of Switzerland.

The biggest cheer was reserved for Roberto Carcelen of Peru, 43, who finished the race last in 1hour 6min 29.9sec, some 28 minutes behind Cologna.

Wearing a pair of sunglasses more adept for mountaineering than skiing, his final lap around the Laura cross country ski centre above Sochi was a study in torture and solitude.

Staring exhausted into the sky as he waded through the tracks, Carcelen must have wondered when it all might end.

But end it did and Carcelen was granted a huge ovation from the stands as he crossed the line carrying a Peruvian flag.

He was also granted the honour at the finish of a hug from the triumphant Cologna who strode over from the winners` enclosure to embrace the man who came last.

Cologna`s supreme act of sportsmanship recalled how legendary Norwegian skier Bjoern Daehlie had waited for Philip Boit of Kenya at the Nagano Olympics in 1998.

Carcelen, the only athlete representing Peru at the Games said, afterwards that it was "a big honour to make history. Hopefully I`ll inspire people in Peru."

He had picked up a respiratory infection which made it hard for him to breathe, coming on top of a rib injury.

"It was a very difficult race for me. There are people with flu at the village and it was hard for me to breathe. I was in a lot of pain in my right ribs."

He did not expect to stay for the closing ceremony. "I think I`ll head back home earlier because I want to see my doctor."

Carcelen competed in the 15 kilometre event in Vancouver 2010, where he became the first Peruvian athlete to take part at the Olympic Winter Games. But he thinks Sochi will his last.

"I`m retiring now. I want to dedicate myself to a cross country development project and to work with kids to get them to the Olympics."

Second last in 86th place was Dachhiri Sherpa, 44, of Nepal who was also given a hug by Cologna at the end of his race.

"I`m quite happy because now I am 44 years old and at this age to make a competition with those less than 30 years old is quite difficult. The level is very high here."

"I will stay here until the closing ceremony. I`m not just coming here to finish my race and go away, this is not my habit and not my mind."

Lacking the waxing specialists employed by the top team, the low-ranking athletes stuck to the snow with almost no glide on their skis.

Proving that cross country skiing knows no boundaries, other lowly finishers included Nadeem Iqbal of India and Tucker Murphy of Bermuda, definitely not a place known for snow-covered tracks.

The women`s race on Thursday saw a similar diversity with racers including Mathilde Amivi Petitjean of Togo. A huge cheer was given to Farzaneh Rezasoltani of Iran, 28, who finished 73rd.

As other athletes raced in T-Shirts, Rezasoltani wore an Islamic headscarf underneath her hat, as well as a light coat in line with her country`s Islamic dress rules.