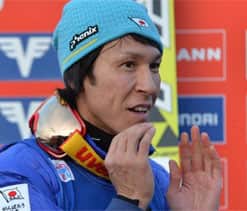 Sochi: Japan`s 41-year-old ski jump veteran Noriaki Kasai, who has pre-qualified for Sunday`s Olympic Games normal hill final, said he had spent too much time relaxing since he arrived in Sochi.

Taking part in a record-equalling seventh Olympics, Kasai put in jumps of 88m and 98.5m in Saturday`s qualification round which, being a member of the world`s top 10, he could use as a training run.

"Today my jump wasn`t good, but I feel myself pretty good," said Kasai.

"I`ve relaxed for two days. It`s very beautiful here, with a good view and amazing mountains. I did some shopping in the Olympic village and I went to meet some friends at the moguls, so I was just relaxing.

"My jump was not good, the timing for the take-off was bad, it was a bit too late. Of course I`m disappointed with my result. I wanted to jump better to have chances to compete in the top 10."

Fellow Austrian, Olympic champion Gregor Schlierenzauer, also pre-qualified, said he will need all his luck to fulfill his dream of gold.

"It`s the same competition as a World Cup for me, so I have to keep focused and do things the same as always," the 24-year-old, six-time world champion, said.

"It would be great to get a medal, but very difficult. You always need a bit of luck to do it."

Current World Cup leader Kamil Stoch of Poland said he was disappointed with the weather conditions during the qualification.

"Normal hill is the kind of hill you need to get to know by doing more jumps," he said.

"That`s why I wanted to take part in the qualification round. I think I discovered all the secrets of this hill and hope nothing will surprise me tomorrow.

"Yesterday there was no wind and the conditions were much better, while today we had a strong tail wind that disturbed us a great deal."

Austria`s Michael Hayboeck was the top qualifier with compatriot Andreas Wank in second and Japan`s Reruhi Shimizu in third.