Two US ships arrive in Black Sea before Sochi Olympics 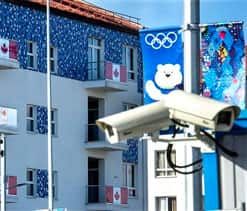 Washington: Two US warships have arrived in the Black Sea and will stand ready to offer assistance in the case of a security emergency at the Sochi Olympic games, officials said Wednesday.

The USS Mount Whitney, a command vessel for the Navy`s 6th Fleet in the Mediterranean, arrived yesterday after departing its port in Naples, Italy over the weekend, officials said.

With a crew of 300 sailors and civilian mariners on board, the Whitney is outfitted with sophisticated communications equipment and a helicopter landing deck.

The second ship, the USS Taylor, is a frigate that arrived in the area today, carrying a crew of about 200 sailors.

"Both ships will perform routine operations in the Black Sea to establish and enhance cooperation, mutual training and interoperability with regional partner nations and allies," the US Navy said in a statement.

Military officers said the vessels would be capable of providing a range of assistance, including potential evacuations of Americans or other foreign nationals, in the event of a possible terror attack at the games.

Russian state media had earlier reported inaccurately that the Whitney would be accompanied by a guided-missile destroyer, the USS Ramage, a larger vessel than the Taylor with more firepower.

The White House said yesterday the United States is "taking all appropriate steps regarding the safety of Americans" at the winter games.

US officials have voiced concerns over security at the February 7-23 games in Russia after two deadly December suicide attacks in the southern city of Volgograd.