World number one Novak Djokovic on Sunday collected his fifth Australian Open title defeating Andy Murray 7-6(5), 6-7(4), 6-3, 6-0 in little over three and half hours. Only Australian Roy Emerson has won more Australian Opens with six in the 1960s.

The Serb has now beaten Murray in three of his four Australian final losses following earlier wins in 2011 and 2013, although the Scot mastered him in his two major triumphs at the 2012 US Open and 2013 Wimbledon. 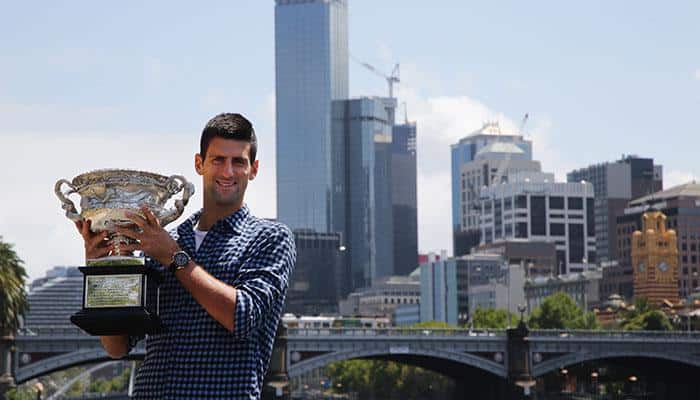 The victory means Djokovic stays at world number one on the next ATP rankings when they are released on Monday, with Murray moving to four from his current sixth.

Murray put Djokovic under pressure with three break points in the third game of the opening set, but the Serb fought back to hold after a 27-stroke rally and an ace.

However, the Serb struck in the next game, breaking Murray to take an early 3-1 lead.

It was hard-fought tennis but the Scot worked his way back by breaking Djokovic on his third break point in the seventh game.

Djokovic jammed the thumb of his serving hand when he slipped chasing a low volley and needed treatment at the next changeover.

It seemed to bother him briefly only and he broke the Scot a second time but was then broken as he served for the opening set, taking it to a tiebreaker.

The top seed trailed 2-4 in the tiebreaker but won five of the next six points to claim the opening set in 72 minutes.

Murray broke for a 2-0 lead in the second set but Djokovic hit back with a double break as the Scot looked in trouble with Djokovic stringing together 13 straight points.

The final was then interrupted for five minutes by political activists, unfurling a banner in support of refugees, with one of them jumping on court. Security guards ringed both players as at least four protestors were escorted out of the stadium.

The stoppage worked in Murray's favour as he broke Djokovic's service to level the set at 4-4. The final went to a second tiebreak which Murray prevailed 7-4 to level the match.

Djokovic suffered an immediate let-down, dropping his opening service in the third set, but stormed back with a double break to edge in front two sets to one with the set taking 39 minutes.

Fired up, Djokovic split the final set wide open, racing through it against a spent and frustrated Murray with a triple break to surge to victory.