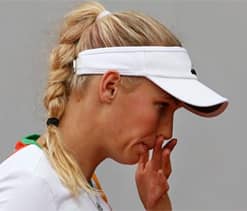 Paris: Caroline Wozniacki`s return to tennis and the public eye after her breakup with golfer Rory McIlroy ended in more pain on Tuesday when the 13th seed was knocked out in the French Open first round by Yanina Wickmayer.

The Belgian won a high-quality baseline battle 7-6(5) 4-6 6-2, condemning Wozniacki to her first opening round defeat at Roland Garros since her debut in 2007.

The players swapped breaks of serve in the first set and the advantage swung one way and then the other in the tiebreak before the Belgian ended a superb rally with a backhand crosscourt winner to take it.

Wozniacki, 23, wasted five break points in the sixth game of the second set but made amends with the score at 5-4 when Wickmayer, serving to stay in the set, netted a simple forehand to bring the Dane level.

But Wickmayer, going for her shots, hit back immediately by breaking Wozniacki in the first game of the final set and again in the fifth.

The Dane broke back thanks to a lucky net cord and a fine drop shot but Wickmayer, ranked 64th in the world, was now clearly on top and sealed victory on her first match point after Wozniacki netted.

McIlroy, like Wozniacki a former world No.1 in his sport, said he called off the engagement after getting cold feet while sorting out the wedding invitations.

The Northern Irishman told the world of his pain at the breakup on the eve of last week`s BMW PGA Championship at Wentworth but he went on to win the European Tour`s flagship event.

Many things wrong with me, admits Li