Twice winner Maria Sharapova and reigning champion Flavia Pennetta advanced to the third round of the BNP Paribas Open on Saturday, though in sharply contrasting fashion. 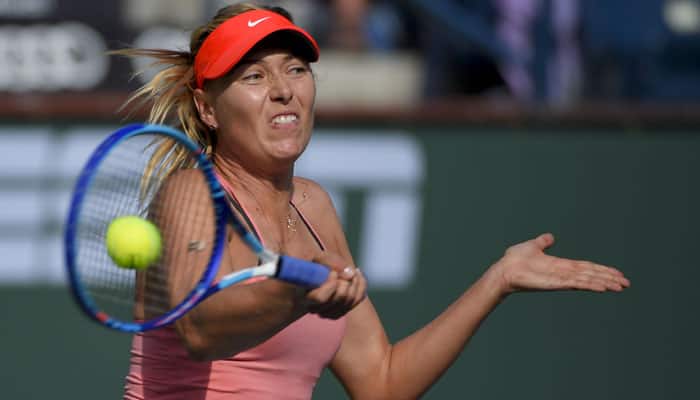 California: Twice winner Maria Sharapova and reigning champion Flavia Pennetta advanced to the third round of the BNP Paribas Open on Saturday, though in sharply contrasting fashion.

Russian Sharapova, the second seed, made a fast start to overpower Belgian Yanina Wickmayer early on but then ran into much stiffer resistance before grinding out a 6-1 7-5 win after one hour and 45 minutes of baseline battle.

Fifteenth-seeded Italian Pennetta overcame an initial bout of nerves to finish strong as she launched her title defence with a commanding 6-4 6-2 win over American Madison Brengle in the first match of the day on the stadium court.

Sharapova, champion at Indian Wells in 2006 and 2013, broke Wickmayer`s serve three times to sweep through the opening set in just over half an hour, a crunching forehand crosscourt winner putting her ahead 6-1.

However, the Belgian was a very different proposition in the second set which went comfortably with serve until a marathon 10th game where Wickmayer saved four match points before holding to level at 5-5.

Sharapova held serve to lead 6-5 and finally converted a sixth match point in the 12th when the Belgian hit a backhand long.

"She`s a tough opponent," world number two Sharapova said in a courtside interview. "She hits the ball quiet hard and has an unbelievable serve. The second set was a different story."

The Russian will next meet Victoria Azarenka of Belarus, who beat Belgian Kirsten Flipkens 6-2 6-4.

Pennetta, best known for her doubles prowess, broke her opponent once in a tightly contested opening set and twice more in the second to wrap up victory in 75 minutes at a sun-drenched Indian Wells Tennis Garden.

"I was nervous in the beginning," the 33-year-old from Brindisi said after ending the match with a rasping forehand crosscourt winner.

"Last year here, I played so well and I have such good memories. This morning I woke up and I was a little bit shaky. So I was trying to be focused on what I had to do, and not rush.

"That was important today," said the Italian, a winner of 10 WTA titles who had lost to Brengle in straight sets in their only previous meeting eight years ago.

Pennetta will next meet either American Taylor Townsend or Australian Samantha Stosur who were playing later on Saturday.

Sania Mirza to be playing captain in India's Fed Cup