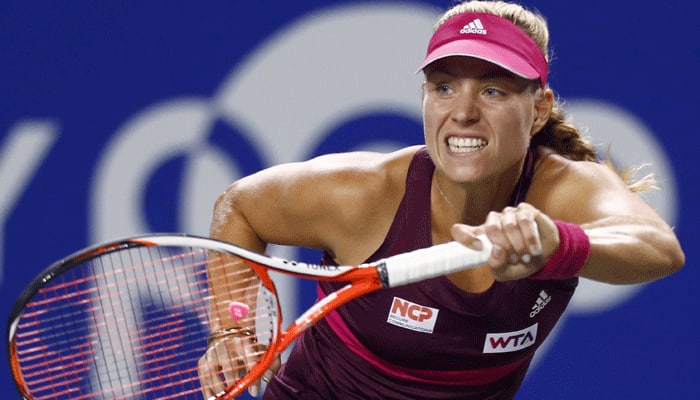 Kerber, the world number eight, grabbed two straight games after the pair were 4-4 in the first set and overcame a 1-3 deficit in the second set to defeat the 35th-ranked Svitolina in 86 minutes.

In the quarter-finals, Kerber will take on Slovakia`s sixth-seeded Dominika Cibulkova who outlasted American Coco Vandeweghe 7-6 (7/5), 7-5 in the round of 16.

"It`s always tough to play your first match in a tournament," said Kerber, who has won four WTA titles.

"But I`m happy about my game, about how I played. It`s nice to be back because I have great memories from last year."

The 27-year-old left-handed Czech lost three straight games after the pair were 3-3 in the first set, but in the second she broke Bencic`s serve in the third game and delivered five aces.

In the decisive set, Safarova broke the 17-year-old in the first and fifth games before conceding no point in the eighth game, finishing her off with two straight aces, her ninth and 10th of the match.

"It was a very tough match. I`m really happy I could win," said Safarova, ranked 15th in the world. "It is very nice to face new young players and play very well."

Bencic, fresh from her run to the quarter-finals at the US Open two weeks ago which boosted her world ranking, said: "I can just take the positive out of this match and I didn`t think it was too bad."

Ranked 34th in the world, she added: "I was playing great in the first set but to be in the top 15, you have to hold that level over three sets."

Safarova, who reached the semi-finals at this year`s Wimbledon, faces third-seeded Ana Ivanovic of Serbia in the round of eight.

Bagel blitz as Agnieszka Radwanska down Chanelle Scheepers in Seoul