Rains lashed the metropolis and other coastal districts of Tamil Nadu on Wednesday. 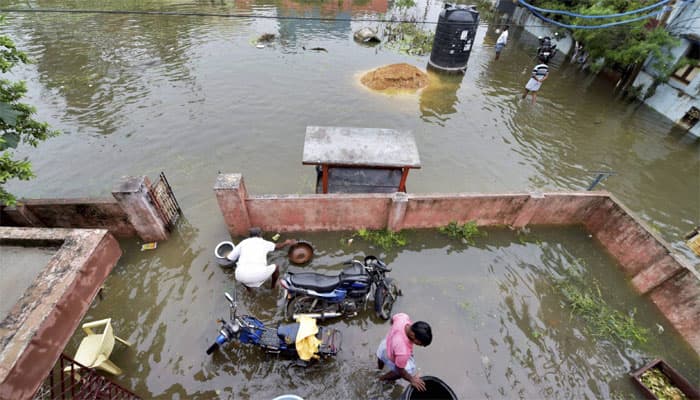 Chennai: Rains lashed the metropolis and other coastal districts of Tamil Nadu leading to closure of schools and colleges for the second day on Wednesday, while two children were electrocuted in a rain-related mishap in the city.

The meteorological office said rainfall occurred here and at Kancheepuram and Tiruvallur districts, besides the Cauvery delta zone including Cuddalore and Nagapattinam, adding there could be overnight rains as well.

Rain is expected in coastal districts and south Tamil Nadu in the next 24 hours, they said.

Two girls, aged 7 and 9 years, were electrocuted when they were playing near their homes at Kodungaiyur here. With this, the toll in rain related incidents climbed to seven.

Expressing grief over the deaths, Electricity Minister P Thangamani said the children had stepped on wire submerged under water and it led to electrocution.

A 5-member team of officials will conduct inspections in Chennai to ensure such incidents are not repeated, he said.

A solatium of Rs 2 lakh will be given to the kin of the each of the deceased by state's power distribution company TANGEDCO (Tamil Nadu Generation and Distribution Corporation), he said. Also, a solatium will be given from the CM's Relief Fund by Chief Minister K Palaniswami, he added.

Parts of Vyasarpadi, Perambur, Choolai and Otteri in North Chennai, West Anna Nagar in Central Chennai and Madipakkam and Keelkattalai in South Chennai were inundated.

At the ESI hospital in Korattur, rain waters caused hardship to patients.

The Met department in a bulletin here said that rain or thundershowers are likely to occur at most places over coastal Tamil Nadu and Puducherry and at many places in interior Tamil Nadu tomorrow.

In the past 24 hours there was rainfall in many parts of the State, the highest being at Ponneri in Tiruvallur district (10 cm), he said.

The upper air cyclonic circulation over the Gulf of Munnar is positioned over Sri Lanka and Southwest Bay of Bengal now and under its influence, in the next 24 hours many places in coastal districts and south Tamil Nadu will receive widespread rainfall.

Barring western districts, interiors of the state will witness moderate showers, he said.

Heavy to very heavy rainfall is likely at some places in coastal districts.

As regards Chennai and neighbouring Kancheepuram and Tiruvallur, there will be intermittent rains and sometimes it could be heavy, he said.

Buses were delayed on several routes due to rains. Traffic snarls were seen at many locations and vehicles were diverted at some points to ease traffic situation.

With the resumption of rains, suburban Mudichur which was already witnessing waterlogging became almost inundated and residents faced acute difficulty in venturing out.

Several homes and retail outlets were shut in Mudichur which falls under Kancheepuram district, and roads wore a deserted look.

Rain water entered some houses at Mudichur and low-lying areas of Madipakkam.

Civic authorities said staffers were being deployed round-the-clock to drain out water from roads and subways.

Trees that got uprooted in some locations were being cleared and Over 400 pumps were being used to clear the roads of water, they added.

Districts including Thanjavur, Nagapattinam and Cuddalore experienced rains yesterday as well. There were brief spells of rain in Chennai and in several parts of Kancheepuram and Tiruvallur districts overnight.