Heavy rains in several parts of Tamil Nadu and neighbouring Puducherry on Sunday inundated many areas, while several roads and subways were flooded. Inconveniencing people and affecting their routine. 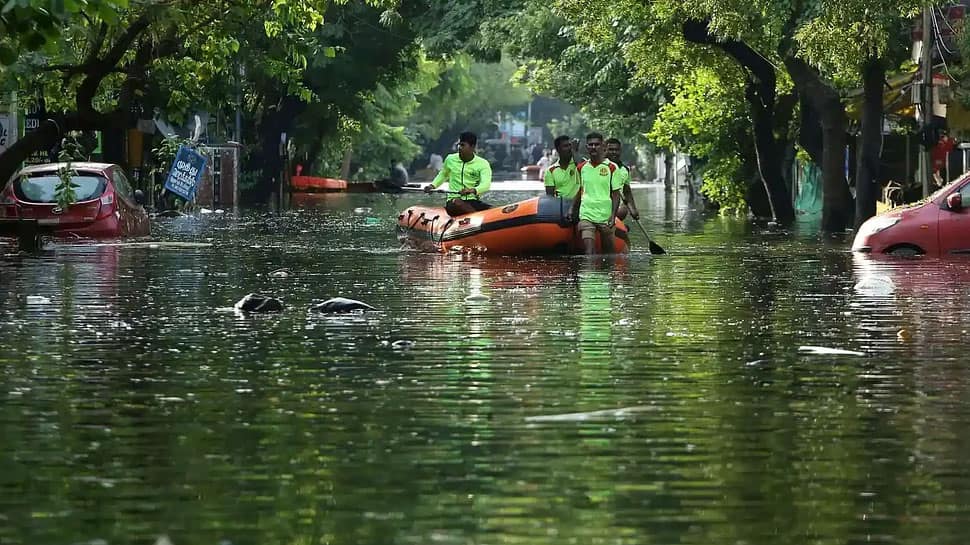 Chennai: A holiday has been declared for schools and colleges in Chennai and surrounding districts on Monday after incessant rains and waterlogging in several parts of the district. The order was issued by Chennai District Collector, Dr Vijayarani.

In T Nagar, heavy rains have led to waterlogging and water gushed into several residences, making it impossible to stay on the lower floor and most have shifted to the upper floors.

However, several houses with only a single floor are not in livable conditions and many have shifted to hotels and some to the residences of close relatives. After many roads and subways were closed, Chennai city is grappling with traffic woes and vehicles have to take diversions.

About 700 people were shifted to relief camps in Chennai and 392 streets in 108 neighbourhoods in the city were inundated. Talking to reporters, S, Selvaraj, a resident of Ganapathy Nagar, said, "This is a recurring phenomenon and has not developed one fine morning. The water-logging issue has to be dealt with war footing and unless the government does it properly, things will be difficult for people to live here. I have to wade through water daily and it is creating itching in my foot."

Heavy rains in several parts of Tamil Nadu and neighbouring Puducherry on Sunday inundated many areas, while several roads and subways were flooded. Inconveniencing people and affecting their routine.

CM Stalin inspected several flooded suburban areas like Tiruverkadu in Tiruvallur District and monitored work to bail out flood water and interacted with the local people while sipping tea at a roadside tea stall and also listened to their grievances.

Stalin gave away flood relief assistance, including essential commodities and blankets, to over 300 people housed in a suburban school and reviewed the flood situation with officials.

In a tweet, the Chief Minister expressed confidence that "we will come out of the aftermath of the heavy rains."

On Sunday, northern regions, including Chennai, Cuddalore and neighbouring Puducherry witnessed moderate to heavy rainfall and it was scattered, light to moderate in other areas of the state, according to the Regional Meteorological Centre.

In view of monsoon showers, most reservoirs in the state have received copious inflows and surplus water is being let out in many regions. People in low lying areas were evacuated and housed in shelters.

"In the past 24 hours, two people (one each in Cuddalore and Tuticorin) districts died in rain related incidents," the government said in a statement.

Nearly a lakh packets of food were distributed to over 1,000 people housed in relief centres here.

In view of the rains, several areas in and around the coastal town of Cuddalore witnessed waterlogging.

In Chennai and its suburbs, most roads were inundated and several subways were closed for traffic, while surplus water continued to be released from reservoirs.

Traffic diversions were enforced at many places here and barricades put up to caution road users. While there were disruptions in the state-run local bus services, suburban railway services were unhindered.

Reservoirs, including Poondi and Chembarambakkam here that cater to the drinking water needs of Chennai, released over 10,500 cusecs of surplus water in view of continuous showers in catchment areas, authorities said.

The release of surplus from Poondi dam in Tiruvallur district was stepped up (from an initial 4,253 cusecs to about 8,000 cusecs) in a phased manner upto about 12,000 cusecs by evening.

An IMD bulletin said a low-pressure area is likely to form over South Andaman sea around 30 November, 2021. It is likely to become more marked and move westnorthwestwards during subsequent 48 hours.

The bulletin pointed to scattered to broken, low and medium clouds with embedded intense to very intense convection over west central and south Bay of Bengal and south Andaman sea.

The North East Monsson season (October to December) is Tamil Nadu's main rainy season. From October 1 till November 27, the state received about 60.33 cm rainfall, as against the usual 34.57 cm for the period, which is 75 per cent in excess.