Some police officials can allegedly be heard saying that they should target the protesters and at least one person should die in the firing. 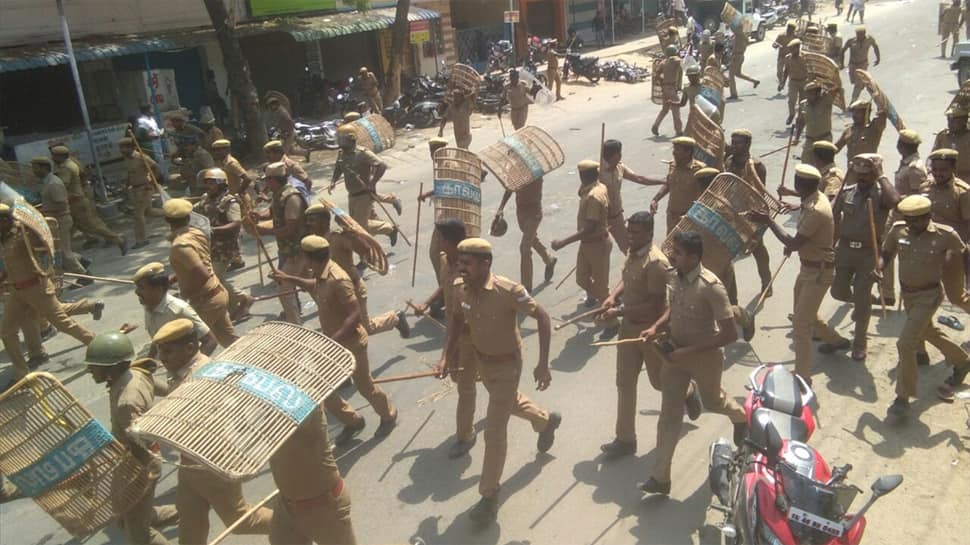 Tamil Nadu Police used assault rifles to fire at the anti-Sterlite protesters in Tamil Nadu's Tuticorin (Thootukudi) on Tuesday. At least 11 people were killed and scores injured when police opened fire after protesters indulged in violence demanding the closure of Vedanta group's Sterlite Copper plant over pollution concerns in Tuticorin.

In a video released by news agency ANI on Tuesday, a policeman in civilian clothes is seen lying on the top of a vehicle and taking aim with his Self Loading Rifle (SLR) at the protesters. Some police officials can allegedly be heard saying that they should target the protesters and at least one person should die in the firing.

Chief Minister K Palaniswami had confirmed reports of deaths in "police action" and had announced a compensation of Rs 10 lakh to the families of each of the deceased. He has also ordered a judicial inquiry into the violence. Palaniswami said in a statement in Chennai that the protesters took out a procession towards the collectorate in defiance of the prohibitory orders clamped in the specific area in Tuticorin. "The police had to take action under unavoidable circumstances to protect public life and property as the protestors resorted to repeated violence... Police had to control the violence," Palaniswami, who holds the Home portfolio, said.

The protests that had been going on in Tuticorin for over three months, took a violent turn on Tuesday with agitators fighting pitched battles with police, prompting it to open fire. Hurling stones and setting government vehicles and public property on fire, the agitators went on the rampage in the town, about 600 km from Tamil Nadu capital Chennai.

Police said nearly 5000 protesters gathered near a local church and insisted on taking out a rally to the district collectorate after they were denied permission to march to the copper smelter plant. Initial pushing and shoving soon led to violent clashes, after agitated locals began hurling stones at police and overturned a vehicle. Security personnel used batons and burst teargas shells to break up the protest.

Many were injured in stone-pelting by the agitators, who also set some vehicles on fire. Windscreens of some government cars were smashed and bank premises were attacked by the rampaging mobs. Reinforcements had been rushed from neighbouring districts to Tuticorin to assist the local administration in restoring normalcy.

The government, underlining its "pro-people commitment", said further legal action would be taken, "respecting" their feelings. "The Tamil Nadu government requests the people to accept this (assurance) and maintain peace," it said.

The statement said the plant was in operation in Meelavitan in Tuticorin for the past 20 years. Following a gas leak in March 2013, the then chief minister the late J Jayalalithaa, ordered its closure, following which the company moved the National Green Tribunal.

With the tribunal overturning the government order, the state moved the Supreme Court against it, and the petition was now pending there, it added. It said the Tamil Nadu Pollution Control Board (TNPCB) had earlier this year rejected Sterlite's application seeking renewal of consent to operate the plant over non-fulfilment of green norms, including those related to disposal of copper waste and effluents.

The company later moved the Appellate Authority and the next hearing is slated for June 6, it said.

Section 144 imposed in Thoothukudi after protests against Sterlite Industries