A video showing the police constable kicking an old man, who was protesting the circumstances around the death of his 17-year-old daughter in Velimela, Sangareddy district, had gone viral on social media. 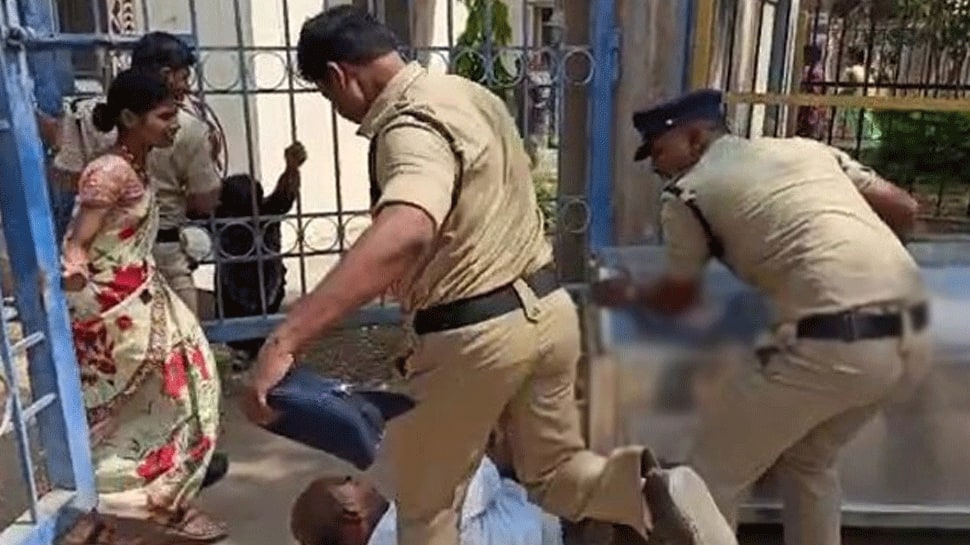 HYDERABAD: A Telangana police constable, who was caught on camera manhandling a grieving father of a 16-year-old college student who had allegedly committed suicide at the college hostel, was suspended for his insensitive behaviour.

"Police constable N Sridhar has been placed under suspension,’’Chandana Deepti, in-charge Superintendent of Police, Sangareddy district, said. The action against the constable came following massive public outrage over the incident that occurred at Patancheru near Hyderabad on Wednesday.

A video showing the police constable kicking an old man, who was protesting the circumstances around the death of his 17-year-old daughter in Velimela, Sangareddy district, had gone viral on social media. Reacting to it, Rama Rao, son of Chief Minister K Chandrasekhar Rao, had tweeted,"Showing empathy in times of grief such as this is the basic courtesy that is expected of Govt officials."

Taking cognizance of the matter, the SP had on Wednesday removed the erring police constable from duty by attaching him with Armed Reserve (AR) headquarters. But many were not satisfied with the action and some netizens wondered if it was really a punishment.

Sandhya Rani, student of Intermediate First Year (11th standard), had allegedly committed suicide at the hostel of a private college in Velimala village in the same district on Tuesday. Police had registered a case of criminal negligence against the college management on the complaint of her father Chandrashekhar, who claimed that she was suffering from fever for last one week but the college authorities failed to send her home or get her treated.

While the body was kept at the mortuary in government hospital, Patancheru for autopsy, the girl`s relatives and students forcibly took away the body. They wanted to take the body to college and stage a protest to demand justice. The police managed to take possession of the girl’s body after dispersing the protestors. As they were carrying back the dead body to the hospital, the girl’s father tried to block their path wanting to know how his daughter died.

The man threw himself to the ground, clinging to the coffin when the enraged police constable, Sridhar, kicked him. Later, an autopsy was conducted on the body but the family refused to take the body till justice was done to them.

The college management late Wednesday announced Rs 15 lakh compensation for the girl`s family. The family later received the body and transported it to their native village in Mahabubnagar district for the last rites.