Will he strive for normalcy or indulge in a much more sinister path? 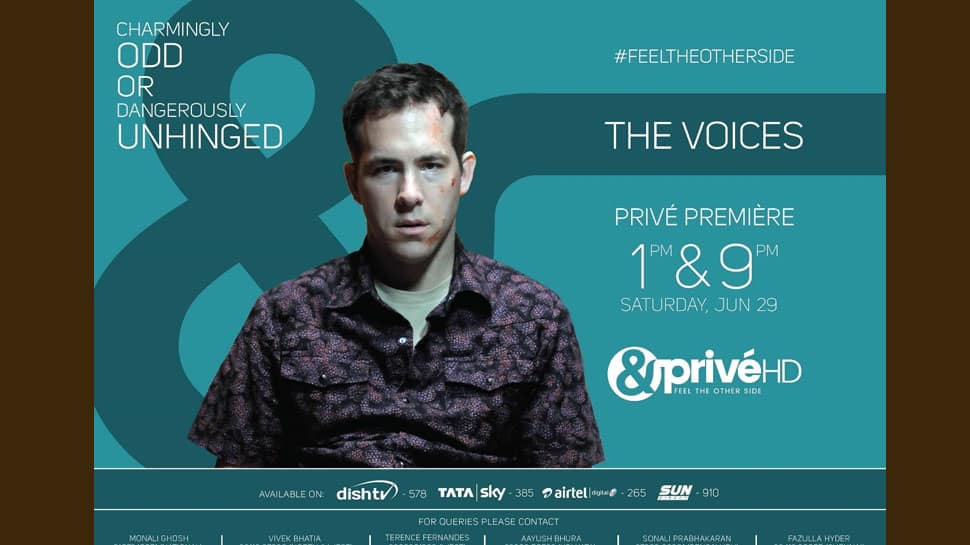 At every juncture in life, we've all wrestled with the two voices in our heads that constantly pull us in different directions. But, the real question is, who do we follow? From the multi-faceted Iranian-French director and cartoonist Marjane Satrapi comes a similar cinematic display of the dark spurs of emotions that lead us to evil temptations.

&PrivéHD, the premium destination for nuanced cinema, is set to premiere, the bizarre and twisted tale of a deranged boy-next-door with 'The Voices' on Saturday, June 29, 2019, at 1 PM and 9 PM. Starring Ryan Reynolds, Gemma Arterton, Anna Kendrick and Jacki Weaver, the dark-comedy is known to have garnered multiple awards and nominations across coveted film festivals such as Festival D Cinema De Paris, Gérardmer Film Festival and Golden Trailer Awards.

The Voices revolves around the life of Jerry (Ryan Reynolds), a seemingly normal man and an upbeat newbie at a bathtub factory.

However, something about this friendly co-worker seems completely off. Turns out, Jerry is a schizophrenic who is undergoing therapy with Dr Warren (Jacki Weaver). Having rejected his medication over a long time makes Jerry hallucinate and indulge in daily conversations with his pets 'Mr. Whiskers', a sadistic tabby cat and Bosco his affable dog. Their 'voices' influence Jerry to take on all sorts of crazy stunts.

Trouble escalates in his merry life when one fine day, Jerry is turned down by his office crush. This triggers a series of sinister impulses that ultimately lead Jerry to commit a gruesome murder. But, that's just the beginning of a disturbing turn of events waiting to unfold. With this opens a Pandora's box of the dark underbelly and unsettling details from Jerry's past and a series of troubling encounters that only make matters worse for Jerry.

Will he strive for normalcy or indulge in a much more sinister path?