The sea-view side of a beachfront condo tower collapsed in the Miami-area town early Thursday morning at least one person has been killed while several residents are trapped in the rubble. 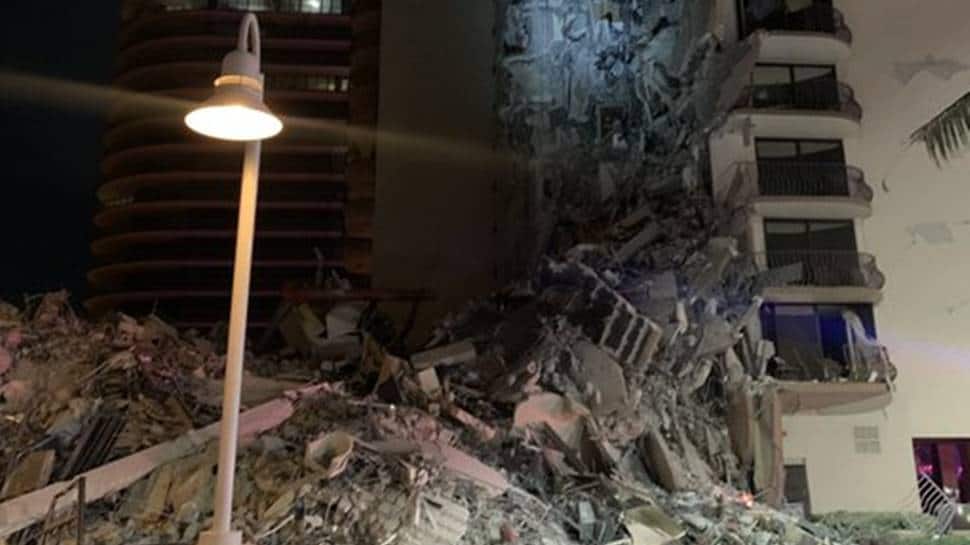 Surfside: The sea-view side of a beachfront condo tower collapsed in the Miami-area town of Surfside early Thursday morning, killing at least one, trapping residents in rubble and twisted metal and sending a cloud of debris throughout the neighbourhood.

Scores of rescue units rushed to the partially collapsed building and firefighters were seen pulling survivors from the concrete debris. In a tweet, Miami-Dade police said one person has died in the collapse.

MBPD and @MiamiBeachFire are assisting the Town of Surfside at a partial building collapse located at 8777 Collins Avenue in Surfside, Florida. Multiple police and fire agencies from across Miami-Dade are assisting. Please follow @MiamiDadeFire for updated information. pic.twitter.com/8tORIfZfjY

Santo Mejil, 50, told the Miami Herald his wife called him from the building, where she was working as an aide for an elderly woman.

"She said she heard a big explosion. It felt like an earthquake," Mejil told the newspaper. He said she later called him and said rescuers were bringing her down.

Authorities had no immediate word on other casualties or details of how many people lived in the building.

Miami Dade Fire Rescue was conducting search and rescue operations, and said in a tweet that more than 80 units were "on scene with assistance from municipal fire departments".

"We're on the scene so it's still very active," said Sgt Marian Cruz of the Surfside Police Department. "What I can tell you is the building is twelve floors. The entire back side of the building has collapsed."

Victor Cohen, who lives nearby, told television station WPLG the building had been undergoing a major renovation when the ocean front wing "collapsed like a pancake".

Teams of fire fighters walked through the rubble, picking up survivors and carrying them from the wreckage.

The collapse left a number of units in the still-standing part of the building exposed. Television footage showed bunk beds, tables and chairs still left inside the damaged apartments. Air conditioner units were hanging from some parts of the building, where wires now dangled.

Police blocked nearby roads, and scores of fire and rescue vehicles, ambulances and police cars swarmed the area.

The debris from the collapse coated cars up to two blocks away with a light layer of dust.

Photos and video from the scene show the collapse affected half the tower. Piles of rubble and debris surrounded the area just outside the building. The department has yet to say what may have caused the collapse.

The sea-view condo development was built in 1981 in the southeast corner of Surfside, on the beach. It had a few two-bedroom units currently on the market, with asking prices of $600,000 to $700,000.

The area is a mix of new and old apartments, houses, condominiums and hotels, with restaurants and stores serving an international combination of residents and tourists. The community provides a stark contrast from bustle and glitz of South Beach with a slower paced neighbourhood feel.