As Kasganj limps back to normalcy, VHP says 'will hold more Tiranga Yatras in Western UP'

The Centre has sought a detailed report from the UP government over Kasganj violence. 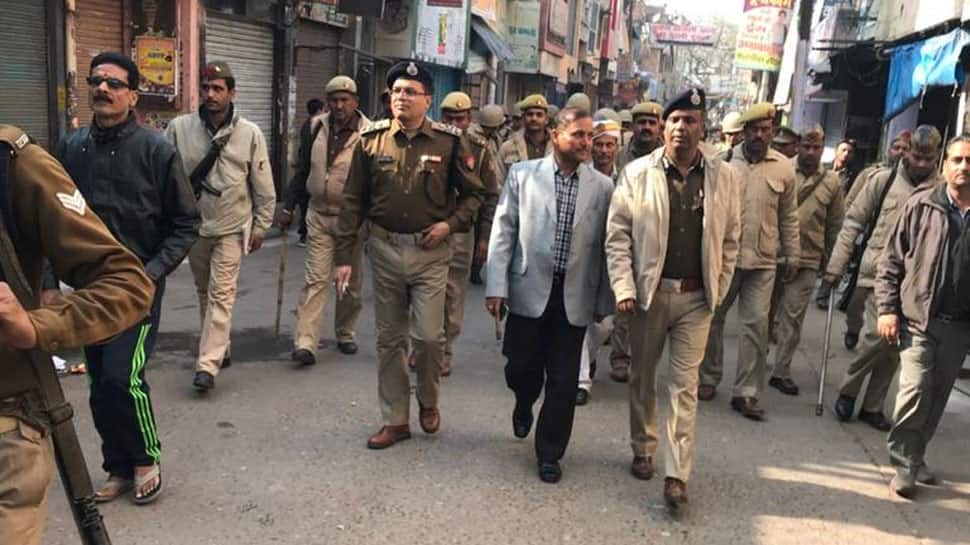 KASGANJ: Even as the violence-hit Kasganj town is slowly limping back to normalcy, the RSS-affiliated Vishwa Hindu Parishad (VHP) has announced its plans to hold more Tiranga Yatras in the western Uttar Pradesh.

The announcement was reportedly made by VHP leader and vice president (Braj Prant) Sunil Parashar, who said,  ''More 'Tiranga Yatra' will be taken out in the Braj region over 20 districts in the Agra, Aligarh and Bareilly divisions in the days to come.'

It is to be noted that clashes broke out in Kasganj after a group of bikers holding a 'Tiranga Yatra' were allegedly attacked by members of another community which resulted in the death of a young man and several others were injured on January 26 – India's 60th Republic Day.

It has come to light that the 'unauthorised' bike rally was taken out by RSS-affiliated students' group Akhil Bharatiya Vidyarthi Parishad and the Vishwa Hindu Parishad (VHP) in the city to commemorate the Republic Day which was allegedly attacked with stones during the roadshow.

Meanwhile, under attack over the deteriorating law and order situation in the state, UP Chief Minister Yogi Adityanath on Tuesday assured that stringent action against the perpetrators of Kasganj violence will be taken.

Adityanath asserted that those found guilty will not be spared.

"The Government will not tolerate any kind of corruption or anarchy in the state. Strict action will be taken against anyone who indulges in such acts," Adityanath told reporters here.

In a related incident, the Centre too sought a detailed report on Kasganj violence from the UP government.

One person, identified as Chandan Gupta, was killed and two others were injured in the Kasganj violence that broke out on January 26.

As life limped back to normal in strife-torn Kasganj, some miscreants tried to create trouble by damaging a dome-like structure on the wall of an Eidgah, located in Amanpur, about 25 km from the district headquarters, officials said on Tuesday.

"In Amanpur, some anti-social elements tried to foment trouble by damaging a dome-like structure on the boundary wall of an Eidgah. But, due to the swiftness of the police and administration, the situation was controlled," he said.

The police will intensify motorcycle patrolling in different areas of the city, Inspector General of Police (IGP), Aligarh, Sanjeev Gupta said, adding that he, too, was keeping a close watch on the situation.

RAF and PAC personnel kept a strict vigil to ensure that the fragile peace was not disturbed again, police said.

The Uttar Pradesh Police, in a statement, said, "As many as seven cases have been registered so far in the Kasganj violence and so far, 114 people have been arrested.''

"Arms and ammunition, including a double barrel gun and a country-made gun, has been recovered. Police teams are conducting raids at the places of identified accused persons," it added.

"Daily activities in the city are going on in the normal manner, and shops are open. The police is continuing with its patrolling. Meetings of peace committees are being held so as to maintain peace and harmony in the area. The law and order situation is normal," the UP Police said.

Meanwhile, the BJP MLA from Kasganj demanded that Chandan Gupta, the youth killed in communal clashes in the town, should be accorded the status of a "martyr".

In a letter to Uttar Pradesh Chief Minister Yogi Adityanath, Kasganj MLA Devendra Singh Rajput (BJP) said, "We demand that Chandan Gupta should be accorded the status of a martyr.

He said the killers of the youth should be tried for treason and strict punishment given to them.

"Two family members of the deceased should be given jobs. A traffic roundabout about should be named after him and his bust size statue should be installed there," he demanded.

A peace committee, formed by the district administration, met this evening to review the situation and appealed to all sections of the society to maintain harmony.