The first prasad was sent to the Mahaveer's family in Ayodhya and it included laddoos, a copy of the Ramcharitmanas, and tulsi mala. 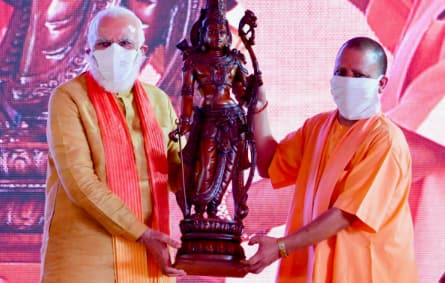 Ayodhya: A Dalit family is the first to get the prasad sent by Uttar Pradesh Chief Minister Yogi Adityanath after the 'bhumi pujan' of the Ram temple in Ayodhya, an official said on Thursday.

The prasad included laddoos, a copy of the Ramcharitmanas and tulsi mala, Chief Minister's Media Advisor Shalabh Mani Tripathi told PTI. He said the first prasad was sent to the Mahaveer's family in Ayodhya.

Mahaveer, a mason who lives at the Suthati locality of Ayodhya, was visited by Adityanath during the 2019 Lok Sabha elections.

Adityanath had food at his house and interacted with his family after the Election Commission banned him from campaigning for 72 hours for his Ali-Bajrang Bali remarks.

Reacting to it, Mahaveer said, "I am a Dalit. The CM sent the first prasad to me and my family. I am thankful to him that he remembered me."

"It's a double delight for us. Firstly, our dream of a Ram temple has been fulfilled. Secondly, we got the first prasad. We hope that now the caste discrimination in the state will end and everyone will think of development and welfare of all," he said.

When contacted, a senior Ayodhya official said due to the COVID-19 protocol, very few people were invited for the 'bhumi pujan'.

"Now, Shri Ram Janmabhoomi Teerth Kshetra trust and the administration are distributing 'prasad' among the maximum number of people. In Ayodhya, the first 'prasad' was sent to the Mahaveer's family on the directions of the chief minister," the official said.

He said all those invited to the groundbreaking ceremony were given a silver coin having pictures of the Ram darbar and the trust's logo.