Following the incident, the UP State Industrial Development Corporation has registered an FIR against eight named and 200 unidentified people. 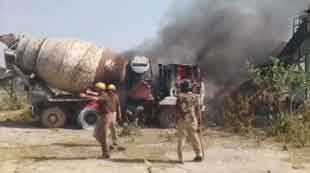 The Unnao SP said that a pipe, kept in front of power substation in Unnao, was also set ablaze by the protesting farmers. He informed that UPSIDC has lodged FIR against eight named and 200 unidentified people. According to police, the miscreants are doing such things to create havoc and appealed to the villagers to maintain peace.

Unnao: A vehicle of crusher plant was set ablaze today. Dist Magistrate (DM) says "Some miscreants are doing this. We will go to villages&appeal to people to maintain peace. This is a deed of miscreants. We'll maintain peace & the work (Trans Ganga City project) will also go on." pic.twitter.com/5AfLWq6t8Z

Unnao SP on clash b/w police&farmers y'day: Some miscreants had later fired bullets on the police party & pelted stones at them. 5 cops were injured. Police has lodged FIR against 30 named and 200 unidentified people. Investigation is underway. 5 people have already been arrested https://t.co/MiXmsLXSZN

Several farmers were injured as police batton-charged the protestors, used tear gas and water cannons. Many policemen, including the additional SP, were also injured as the protestors targeted them with stones, District Magistrate Devendra Kumar Pandey said. Following the clash, a heavy police force was deployed at the protest site on Saturday in order to prevent any toward the incident.

Trans Ganga City is the planned satellite township in Unna district of Uttar Pradesh which comes underthe Kanpur metropolitan area. The area comprises the stretch from the limits of the Unnao Municipality to the Ganga river near Kanpur on NH 25 and Unnao-Shuklaganj Highway.

The Uttar Pradesh government has also prosed a Skill Development University near the proposed Hi-tech city.