Hurt over being reprimanded by BJP MLA, UP IPS officer expresses her anguish on Facebook

A woman IPS officer has taken to Facebook to express her anguish after she was reprimanded for taking action gainst some protesters. 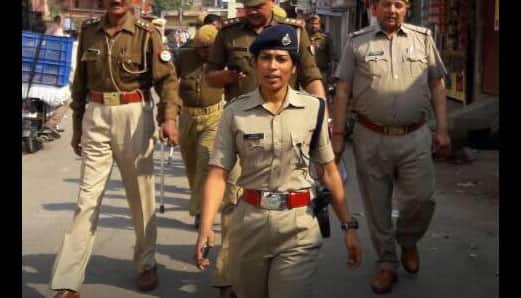 Lucknow: A woman IPS officer has taken to Facebook to express her anguish after she was reprimanded for taking action against some protesters.

IPS officer Charu Nigam broke down in tears when she was scolded by BJP MLA Radha Mohan Das Aggarwal for stopping some protesters in UP's Gorakhpur town on Sunday.

“Please don't take my tears as a sign of weakness. Not out of harshness, but the eyes welled up from tenderness," she wrote in her post.

She began her post by saying "To everyone who has turned up in my support”.

“I am a woman officer, your arrogance will not see that. The power in truth will show its colours soon," she wrote.

“My training hasn't taught me to be weak. I just did not expect that my SP city Ganesh Saha Sir would outrightly reject the irrational argument and talk about my injury.

“Before sir came, I was the seniormost officer in the police there but when sir came and stood by the force, I got emotional,” she said.

She also thanked the media for standing by her side in her “hour of distress”.

“Media has taken this stand because every one of them saw both the incidents and this shows the positivity of media in Gorakhpur.

“I am thankful to them to have shown the truth with least manipulation.

“I believe that good gets good and that's why I have got the support of the media,” she wrote.

She concluded her post by saying, “Please stay calm! I am fine and slightly hurt. Nothing to be agitated or worried about. Regards, Charu."