The PM was felicitated by Union Civil Aviation Minister Jyotiraditya Scindia upon his arrival here. UP Governor Anandiben Patel, CM Yogi Adityanath and other top dignitaries were present during the occasion. 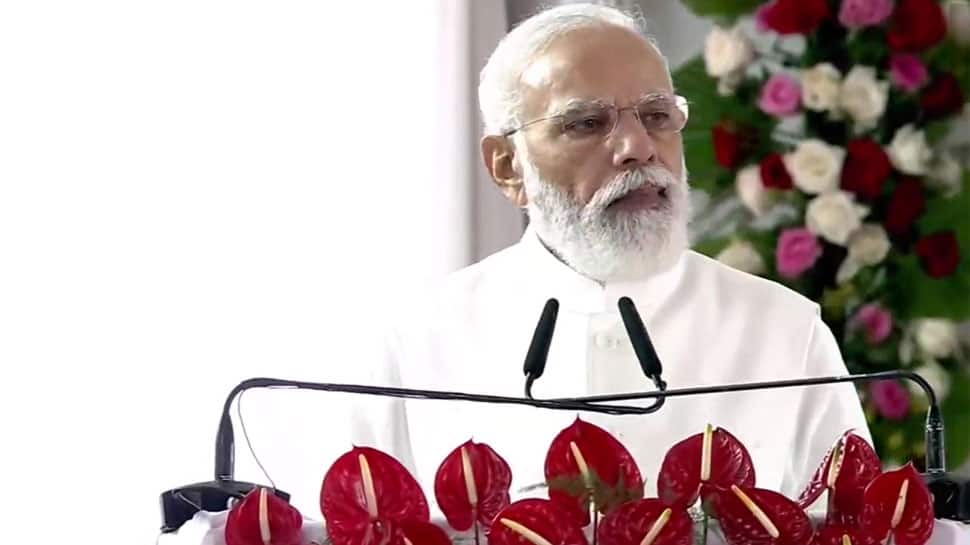 Kushinagar: Prime Minister Narendra Modi on Wednesday inaugurated the Kushinagar International Airport, which is an endeavour to connect Buddhist pilgrimage sites around the world and will also later launch various development projects during his visit to poll-bound Uttar Pradesh.

"Kushinagar International Airport is the result of decades of hopes and expectations. My happiness is two-fold today. As curious about the spiritual journey, I have a sense of satisfaction. As a representative of the Purvanchal area, it is time for the fulfilment of a commitment,'' PM Modi said during his inaugural speech.

Kushinagar International Airport is the result of decades of hopes & expectations. My happiness is two-fold today. As curious about the spiritual journey, I've a sense of satisfaction. As a representative of Purvanchal area, it is time for the fulfilment of a commitment: PM Modi pic.twitter.com/pLCdOgZFY3

"Kushinagar International Airport won't just be a mode of air connectivity. Be it farmers, animal keepers, shopkeepers, workers, local industrialists -it'll benefit all. It'll create an ecosystem of business. Tourism will get maximum benefit, it'll generate employment for youth here," the PM said in his speech

The PM added that ''the government's effort will be to have a network of more than 200 airports, heliports and water dam in the nation in the next 3-4 years.''

The PM was felicitated by Union Civil Aviation Minister Jyotiraditya Scindia upon his arrival here. UP Governor Anandiben Patel, CM Yogi Adityanath and other top dignitaries were present during the occasion.

The PM will inaugurate the Kushinagar International Airport shortly. pic.twitter.com/nOwun8XMJm

The airport has been built at an estimated cost of Rs 260 crore and will facilitate domestic and international pilgrims to visit the 'mahaparinirvana' site of Lord Buddha and is an endeavour to connect the Buddhist pilgrimage holy sites around the world, it added.

The airport will serve nearby districts of Uttar Pradesh and Bihar and is an important step in boosting investment and employment opportunities in the region.

The Union Cabinet chaired by the Prime Minister gave its approval for the declaration of Kushinagar Airport in Uttar Pradesh as an International Airport in June 2020.

Kushinagar Airport is located in the vicinity of several Buddhist Cultural Sites like Sravasti, Kapilvastu, Lumbini (Kushinagar itself is a Buddhist cultural site) and declaration as an "International Airport" will offer improved connectivity, a wider choice of competitive costs to the air-travellers.

The Prime Minister's Office had earlier informed that the PM will also participate in an event marking Abhidhamma Day at the Mahaparinirvana Temple in Kushinagar before attending a public function to inaugurate and lay the foundation stone of various development projects.

The inauguration of the Kushinagar International Airport will be marked by the landing of the inaugural flight at the airport from Colombo, Sri Lanka, carrying a Sri Lankan delegation of over 100 Buddhist monks and dignitaries including the 12-member holy relic entourage bringing the holy Buddha relics for exposition.

At a public event, the Prime Minister will also lay the foundation stone of Rajkiya Medical College, Kushinagar which will be built at a cost of over Rs 280 crore. The college will have a 500-bed hospital and provide admissions to 100 students in the MBBS course in the academic session 2022-2023.

He will also inaugurate and lay the foundation stone of 12 development projects worth over Rs 180 crore.