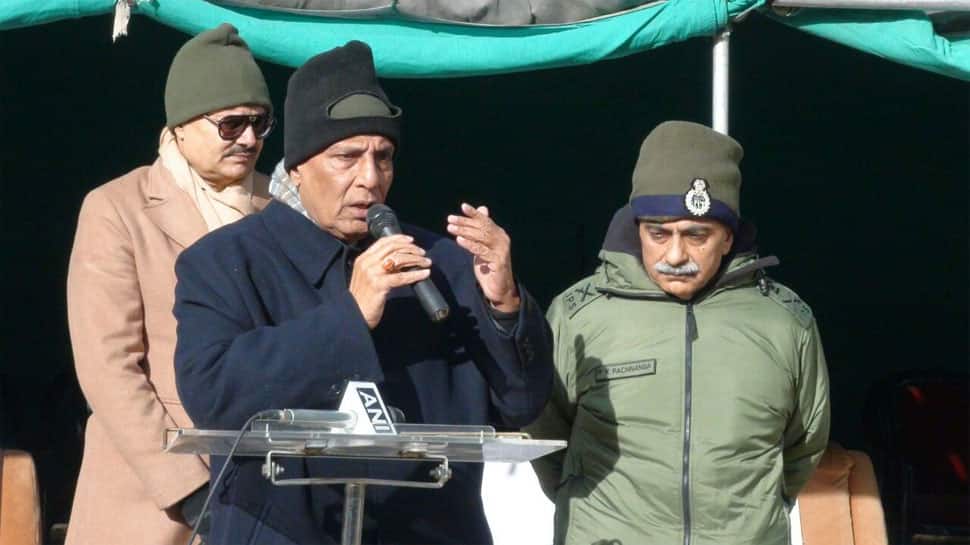 Addressing a sainik sabha, Singh praised the ITBP jawans for their dedicated service on tough high altitude and sub-zero conditions at the Himalayan heights.

"The Himveers are working with a high morale on the Himalayas. The MHA is aware of the services rendered by the ITBP personnel in difficult circumstances and is trying to extend all possible support to the Force," he said.

The HM reached the 12th Battalion of Indo-Tibetan Border Police (ITBP) based in Matli, Uttarkashi on Monday.

Rajnath Singh reached the Nelong BOP of the ITBP located at 11,636 ft MSL with Director General, ITBP, RK Pachnanda and senior officers of ITBP. This is the first-ever visit by the Union Home Minister to the Nelong Valley.

Visited Nelong BOP and interacted with @ITBP_official jawans and officers on the first day of 2018. I salute their indomitable spirit and courage. These brave soldiers make many sacrifices to secure our borders. pic.twitter.com/WEXwuxNxgh

On Sunday, Singh met the families of jawans residing at the family quarters of the Unit premises and greeted them.

Had a wonderful interaction with the families of @ITBP_official jawans at Matli in Uttarkashi (Uttarakhand) on the eve of new year. The families of our jawans give them strength and necessary support to secure the boundaries of our great nation. pic.twitter.com/32pMJR6rSg

Homely moments with families of #Himveers of #ITBP

Wishing the personnel of the border guarding force a happy new year, Singh talked about his idea of reducing the current three months' time of rotating the troops at such arduous and tough posts.

"I will urge the ITBP to find ways and see how can we reduce the time period of deployment of troops, from three months to the least possible, as a lot of time is also spent on commuting to and from such hard areas," he said.

Heaping praise on the jawans and officers of the force, the HM said any amount of facilities provided to them would be less, considering the challenging terrain and nature they had to deal with.

(With ANI and PTI inputs)