The CM is holding a sit-in protest at Metro Channel in Kolkata after CBI officers showed up near the residence of Kolkata Police commissioner Rajeev Kumar, who has been under the scanner in connection with the ponzi scheme scam case investigation. 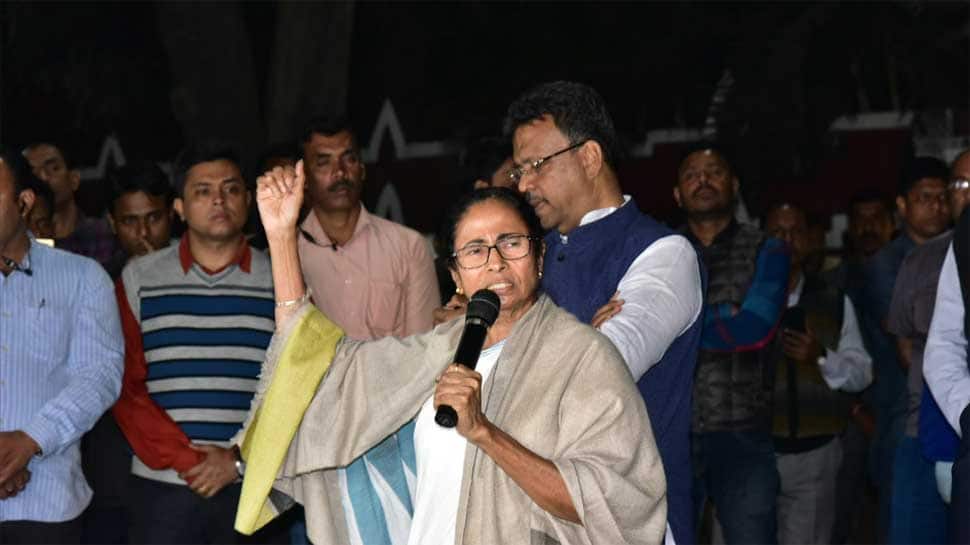 KOLKATA: All opposition parties on Sunday extended their support to West Bengal Chief Minister Mamata Banerjee after a mega showdown between the Kolkata police and Central Bureau of Investigation (CBI). The CM is holding a sit-in protest at Metro Channel in Kolkata after CBI officers showed up near the residence of Kolkata Police commissioner Rajeev Kumar, who has been under the scanner in connection with the ponzi scheme scam case investigation.

Accompanied on the protest by Rajeev Kumar, she said that she lashed out at the Bharatiya Janata Party (BJP) saying that whatever is happenings in Bengal was part of the unrelenting attack on India's institutions by Prime Minister Narendra Modi and his party.

After speaking to Mamata, Rahul tweeted: "I spoke with Mamata Di tonight and told her we stand shoulder to shoulder with her. The happenings in Bengal are a part of the unrelenting attack on India`s institutions by Modi and the BJP. The entire opposition will stand together and defeat these fascist forces," he said.

Kejriwal too hit out at PM Modi and BJP chief Amit Shah alleging that the duo's action is against democracy. "Spoke to Mamta didi and expressed solidarity. Modi-Shah duo's action is completely bizarre and anti-democracy," Kejriwal tweeted.

Tejashwi said he might head to Kolkata to join Mamata in her protest. "BJP has not only venomous and nefarious agenda against opposition leaders but Indian Administrative Service and Police Officers. Might visit Kolkata tomorrow," he said.

Naidu cautioned that such an attack before the Lok Sabha elections will have disastrous consequences. "The misuse of institutions by the union government to victimise political opponents in States is reaching dangerous proportions. We strongly condemn the incidents happening in Kolkata, a glaring example of how Modi-Shah duo are destroying the institutions. Attacking political opponents in different States, few days before the Parliament elections commence, will have disastrous consequences in the country," he said.

Abdullah also extending his support to Mamata and lashed out at the Centre. "The use of the CBI as a political tool has crossed all limits as has the Modi government's misuse of institutions. A former CM having such little regard for India's federalism is shocking," he said.

Taking to Twitter, former prime minister and Janata Dal (Secular) chief HD Devegowda likened the situation in West Bengal with the Emergency days. "I am shocked learning about the CBI rushing to arrest the Police Commissioner and subsequent developments in West Bengal. The country has faced similar kind of unconstitutional methods during the Emergency. Situation in WB is similar to that of the emergency days. #SaveDemocracy," he tweeted.

However, CPI-M General Secretary Sitaram Yechury attacked both Banerjee and the BJP accusing both of "drama". "It does a drama to act now, after 5 years, and TMC leadership responds by staging a drama to protect its corrupt. This drama in Kolkata by BJP and TMC is not a fight for any principle but only to save their corrupt and hide their corruption. CPI(M) has fought both these undemocratic, corrupt, communal and dictatorial regimes in the Centre and the state and will continue to do so," he said.

In an unprecedented development on Sunday evening, Banerjee sat on a dharna, protesting CBI's attempt to quiz Kolkata Police chief Rajeev Kumar in connection with chit fund scams. She accused the Centre of trying to run a parallel administration in states, saying there is a "constitutional break-down".

A CBI team went to Kumar's residence in the city's Loudon Street area but was denied permission to enter. They were bundled into police jeeps and whisked to a police station.

The CBI has been wanting to quiz Kumar, who led a Special Investigation Team of West Bengal police probing the scams, regarding missing documents and files.