At the Gandhi statue, Banerjee and party cadres raised slogans of 'Jai Hindi' and 'Vande Mataram'. 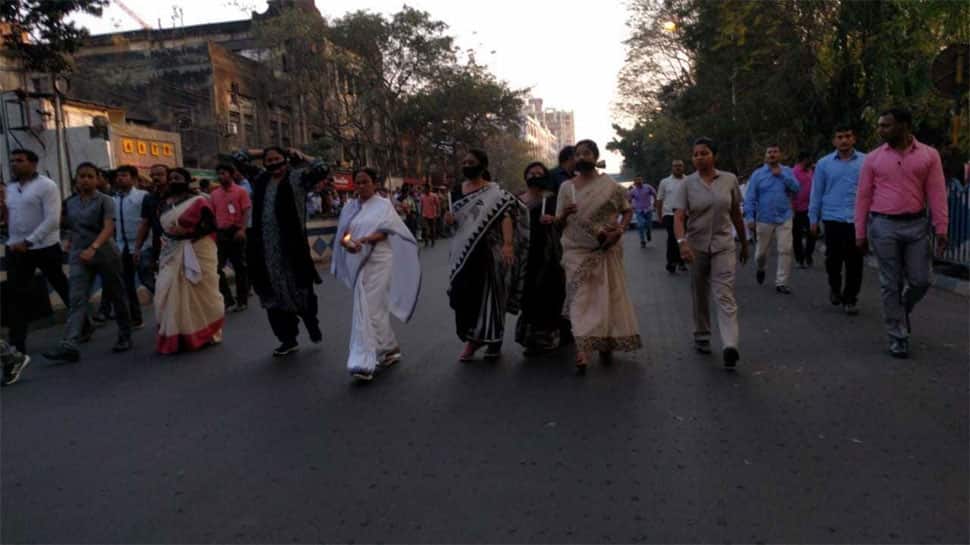 Kolkata: West Bengal Chief Minister and Trinamool Congress supremo Mamata Banerjee on Saturday took to streets to show solidarity with the CRPF jawans who were martyred in the deadly Pulwama terror attack.

Banerjee along with hundreds of Trinamool Congress supporters took out a candlelight march from Hazra in South Kolkata to Mahatma Gandhi's statue in Esplanade to pay their respects to the martyrs.

Beside Banerjee, other senior leaders were seen joining the solidarity rally without any party flags and slogans. Leaders holding on to candles had covered their faces with a black stripe to register their protest against the terror attack that claimed lives of at least 40 CRPF personnel.

At the Gandhi statue, Banerjee and party cadres raised slogans of 'Jai Hindi' and 'Vande Mataram'.

"All of us are united. This is united India. Terrorism has no religion. We do not support any kind of terrorism be it in the country or in the world. We stand united with the families of the CRPF jawans who lost their lives in the line of duty," said Banerjee.

This apart, party supremo Banerjee asked leaders to take out a silent protest on Sunday in their respective blocks to show solidarity with the jawans.

"In between 2 to 3 pm, take out a silent rally in your respective areas. Also, keep in mind that no microphones or speakers can be used as students are appearing for Madhyamik examinations," she added.

For Mamata Banerjee, Congress a foe in state but friend at national level to 'fight' BJP