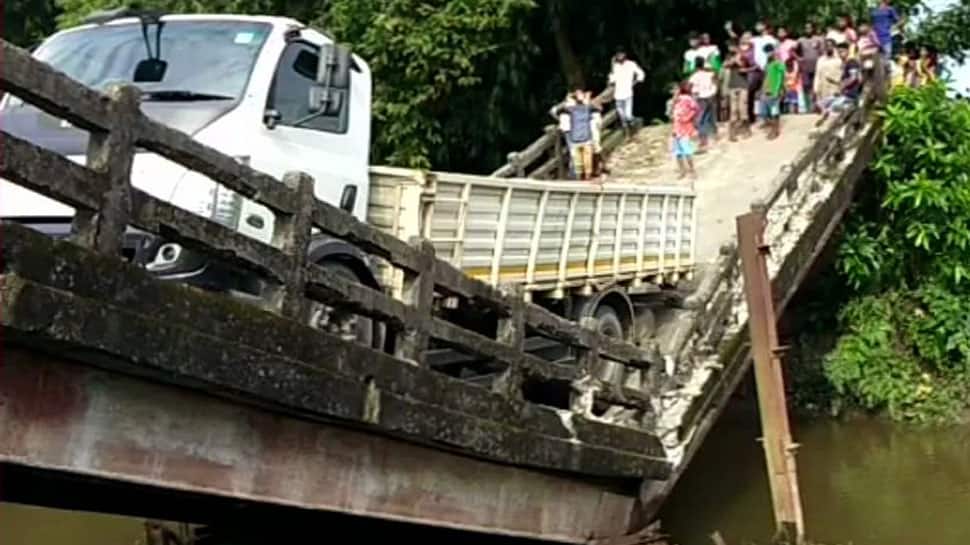 The bridge connects Manganj and Phansidewa areas to Siliguri, a major city in north Bengal. Phansidewa is around 22 km from Siliguri. "The movement of loaded trucks is banned on this bridge but many such vehicles bound for north-eastern states continue to take that bridge. This accident is a result of that," North Bengal Development Minister Rabindranath Ghosh said.

He said this bridge was constructed long back and papers of the structure are not available. Repair work of the bridge will be undertaken after the PWD prepares a report, he said.

Tourism Minister Gautam Deb said the bridge was maintained by the Siliguri Mahakuma Parishad (a sub-divisional body), run by the CPI(M)-led Left Front. "I will report to Chief Minister Mamata Banerjee," Deb said.

Engineers and state government officials have rushed to the spot.

Senior CPI(M) leader of Darjeeling district Jibesh Sarkar accused the Trinamool Congress government and the district administration of ignoring repeated pleas to repair the bridge. "We had informed the state and the local administration that it needs to be repaired. But as it is a Left-run Mahakuma Parishad, funds were not released by the government," said Sarkar.

An under-construction flyover also collapsed at Phansidewa on August 11, but there had been no casualty. The chief minister Thursday said a nation-wide survey of bridges should be undertaken. She said there are 20 bridges in and around Kolkata which have crossed their expiry dates.

While NDRF and local police rushed to the spot immediately after the incident, political blame game too began shortly after with opposition leaders questioning why proper repair work was not done. BJP even demanded that West Bengal Chief Minister Mamata Banerjee ought to resign.

CM Mamata had already sought a report from top officials regarding the incident. She also visited the site on Wednesday evening and assured of action. "I cannot ignore any angle of the probe. I will keep an eye on timely inspection of all bridges and have asked for health reports from engineers."

The incident occurred at around 4.45 pm, following which fire tenders, ambulances, and teams of NDRF and local police rushed to the spot. West Bengal minister Firhad Hakim also reached the spot soon after the information came in. He said that the priority was to conduct rescue operation to take those trapped out of the debris. Pointing that the bridge is 40-year-old, he added that a technical team would later look into the cause of the collapse