A coastguard patrol boat found the boat on the Naf river, which acts as a border between Bangladesh and Myanmar, as it tried to enter Cox`s Bazar early in the morning. 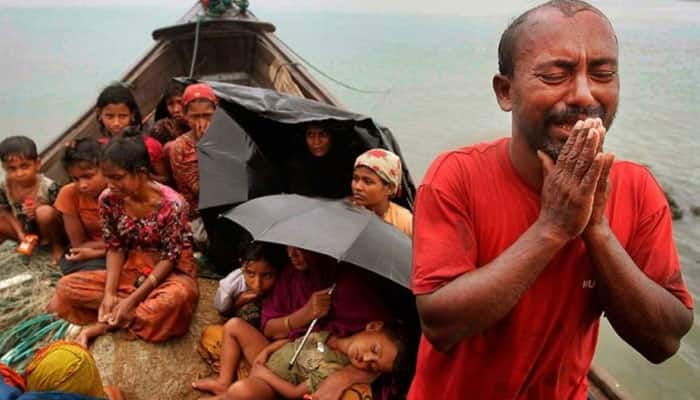 The push-back came after at least 500 Rohingya fled their villages in Myanmar`s Rakhine state, crossing the border to take shelter in refugee camps and hills in Bangladesh`s southeastern Cox`s Bazar district.

A coastguard patrol boat found the boat on the Naf river, which acts as a border between Bangladesh and Myanmar, as it tried to enter Cox`s Bazar early in the morning.

The refugees included women and children who said they were victims of violence, coast guard spokesman Sheikh Fakhr Uddin said quoting the escapees.

"We found two injured among 18 men, along with nine women and four children. But we had to send them back," Uddin told AFP.

The latest influx follows a months-long bloody military crackdown on the mainly Muslim minority in Myanmar that led tens of thousands to flee across the border.

The United Nations has said the violence may amount to ethnic cleansing.

"We have beefed up our patrol on the Naf as (Myanmar) army is gathering in the bordering villages, which may prompt them (Rohingya) to try coming to Bangladesh," Uddin said.

Their numbers swelled last October when more than 70,000 Rohingya villagers began arriving, bringing stories of systematic rape, murder and arson at the hands of Myanmar soldiers.

Last week, the UN special rapporteur Yanghee Lee voiced alarm at reports that a Myanmar army battalion had flown into Rakhine to help local authorities boost security in the region.

Buddhist-majority Myanmar has long faced criticism for its treatment of the more than one million Rohingya who live in Rakhine, who are seen as interlopers from Bangladesh, denied citizenship and access to basic rights.

But they are also increasingly unwelcome in Muslim-majority Bangladesh, where police often blame them for crimes such as drug trafficking.

Dhaka has floated the idea of relocating tens of thousands of Rohingya refugees to a remote, flood-prone island off its coast, despite opposition from rights groups.

Spain attacks: What we know about the suspects