China has also made rapid strides in developing hypersonic missiles, known as the DF-17, which theoretically can manoeuvre sharply at many times the speed of sound, further bolstering the reach of the People’s Liberation Army (PLA). 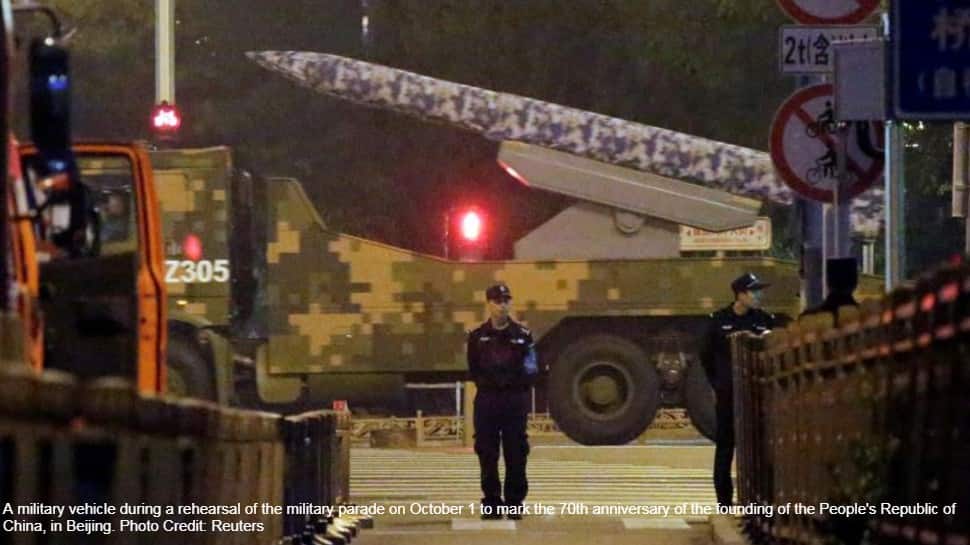 Beijing: China’s armed forces are expected to roll out an array of new weapons at a military parade in Beijing next week as President Xi Jinping shows off his ambitious military modernisation programme. China’s advanced missiles will be a main attraction at the October 1 military parade to mark seven decades of Communist China. Many of them are designed to attack the aircraft carriers and bases that undergird U.S. military strength in the region.

Among them are the so-called “carrier killer” Dongfeng-21D (DF-21D), unveiled at a parade in 2015, which China says can hit warships at a range of up to 1,500 kilometres, and the DF-26 intermediate range missile, dubbed “Guam killer” in reference to the US Pacific island base. Attention in state media has focused on the DF-41 intercontinental ballistic missile, which can carry several nuclear warheads and reach the United States, forming the backbone of China’s nuclear deterrent.

China has also made rapid strides in developing hypersonic missiles, known as the DF-17, which theoretically can manoeuvre sharply at many times the speed of sound, further bolstering the reach of the People’s Liberation Army (PLA). Sam Roggeveen, director of the Sydney-based Lowy Institute’s International Security Program, said there was no real workable defence against hypersonic missiles, aside from attacking the launcher, which would mean striking the Chinese mainland. That carries the risk of a nuclear response.

“The missiles, particularly the medium-range and intermediate-range missiles, are critical to the anti-access and area-denial strategy, which is at the heart of the PLA’s strategy to counter American air and maritime power in Asia,” Roggeveen said.

Analysts are particularly interested in the potential unveiling of two models of stealthy drones during the parade. China has a practice of only displaying systems in parades it says are operational, suggesting that if the drones are shown they mostly likely have already entered some form of service.

Analysis of leaked photos and prototype models leads experts to believe one of them, the Sharp Sword, which resembles the United States’ X-47 series carrier-launched stealth drone, has weapons bays. State media has said the drone had its first test flight in 2013. Military watchers spotted the second Chinese drone, most likely a supersonic or hypersonic reconnaissance aircraft, possibly designated the DR-8, under cover during parade rehearsals. The shape is said to resemble the U.S. D-21 reconnaissance drone of the 1960s, which could travel at more than three times the speed of sound.

But experts add it will be hard to know how effective the uncrewed aircraft will be or how well the PLA can fit them into its network of other platforms.“It is difficult to be too serious about some of the equipment that the Chinese might be showing off. Some of them could be experimental or prototypes,” said Richard Bitzinger, a visiting senior fellow with the Military Transformations Program at the S. Rajaratnam School of International Studies in Singapore.

China has said about 15,000 personnel and more than 160 aircraft will be in the procession, making it larger than the last mass parade in the capital in 2015 celebrating the 70th anniversary of the end of World War Two.

Officials say Tuesday’s parade is not meant as a “muscle flexing” exercise.

But China is facing a tricky strategic situation, boxed in by US allies and military bases near the Chinese coast, including U.S.-armed Taiwan, and repeated challenges to its claims of sovereignty in the disputed South China Sea. Chinese Defence Ministry spokesman Ren Guoqiang on Thursday said the world was not a safe place and that the PLA “must be fully prepared and bide its time for battle.”

Many western military officials and experts say China’s spending on such parades, with their visually stunning choreographed marching, have almost no value for war. The sabre rattling may also contradict Beijing’s efforts to project a benign image of China’s growing military, experts say. “It shows some old fashioned thinking within China’s armed forces,” one Western diplomat in Beijing said on condition of anonymity.