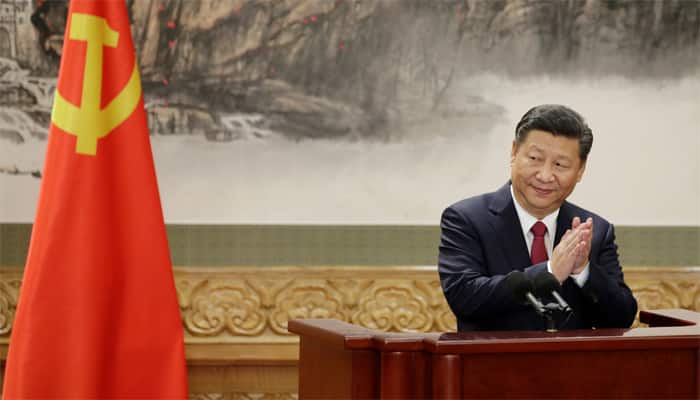 "I wish that under the new situation, the Chinese side would make efforts with the DPRK side to promote relations between the two parties and the two countries to sustainable soundness and stable development and thus make a positive contribution to ... defending regional peace and stability and common prosperity," Xi wrote in the message dated Nov. 1, according to the North`s official news agency KCNA.

China and North Korea often exchange routine diplomatic correspondence and ceremonial letters on political anniversaries or political promotions, although personal messages to and from the leaders tend to be few.

While China has yet to issue its account of the message, Xi has previously sent messages to Kim, most recently last year when Xi expressed his congratulations for a party congress in North Korea.

In 2015, a senior Chinese official visiting Pyongyang also handed over a letter to Kim from Xi.

However, Xi has yet to visit Pyongyang since becoming president in 2013 and Kim has also not visited China since he became leader in 2011.

Kim sent a rare congratulatory message to Xi last week at the end of China`s all-important Communist Party Congress, wishing him "great success" as head of the nation.

The friendly exchanges by the two leaders come as China is being urged by the international community to do more to rein in the North`s missile and nuclear tests that have raised tensions globally, as well as a visit to Beijing by U.S. President Donald Trump where North Korea will be high on the agenda.

China, the North`s sole major ally, has grown increasingly frustrated with Pyongyang following the isolated state`s defiant pursuit of its nuclear and missile programmes, repeatedly calling for restraint and urging all sides to speak and act carefully.

Beijing accounts for more than 90 percent of trade with North Korea and has been called upon by several countries, especially the United States, to step up its efforts to implement U.N. Security Council sanctions restricting trade with the country.

China, which fought together with North Korea in the 1950-53 Korean war, has said repeatedly it is implementing U.N. resolutions on North Korea, but also that what it terms "normal" trade and humanitarian assistance should not be affected.