White House officials had to use wet vaccums to pump out water even as people in other parts of Washington grappled with problems like waterlogging. 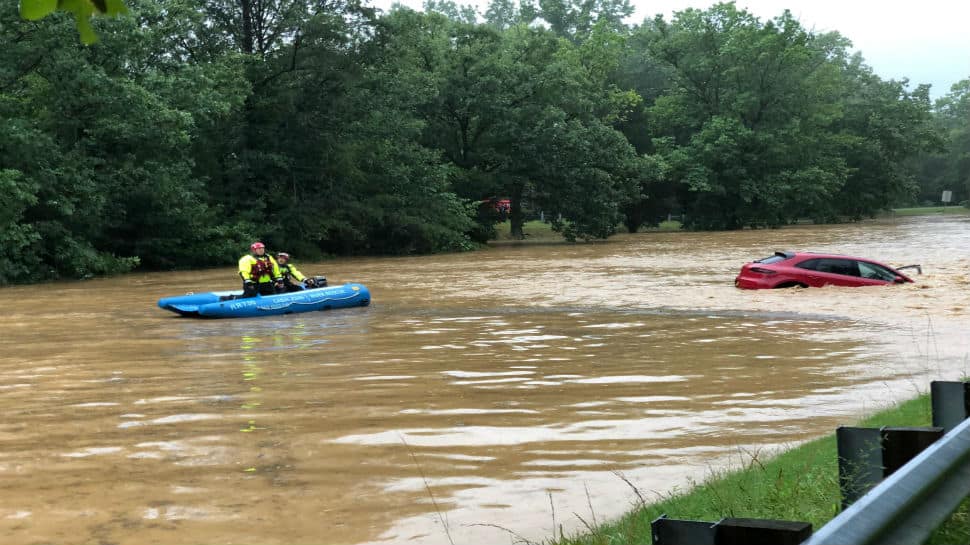 Crew of a water rescue vessel is seen in flood waters on Clara Barton Parkway near Washington. (Reuters Photo)
Share:
Written By:

It may be the capital of the world's most powerful in the country but Washington could do very little against the fury of nature when flash floods hit the city on Monday. Thousands were severely affected as US media reported streets being washed away and cars in many areas half-submerged under water.

Apocalyptic scenes were witnessed in the city when a rainstorm resulted in flash flooding with even the White House unable to keep water out. Fox News reported that the basement near the West Wing of the White House was soaked as the water came gushing in. This resulted in a large puddle here with officials forced to use wet vacuums to pump the water out.

Scenes were even worse in other parts of the city.

It is reported that several Metro stations in Washington had at least ankle-deep water with commuters taking to Twitter to share their hassles. Many complained that the local authorities were woefully unprepared to deal with the weather phenomena. Emergency personnel were deployed to Metro stations and other parts of the city where they have been carrying out rescue works. Large pumping machines have reportedly been deployed in areas where streets are waterlogged. Motorboats and rafts too were brought out to help commuters stranded in cars which were partially submerged in water.

I’m advising commuters not to use the street elevator at Pentagon Metro this morning. #wmata pic.twitter.com/z8bNwAPcPG

Hey, @EENewsUpdates, I think I’m going to be late for work. @wmata pic.twitter.com/wg2ycFOp3L

The worst may be over with the local Met department predicting that the line of storms has moved away from the city. Tuesday could be a sunny day which could result in clogged waters receding. It has also been predicted that the rest of the week would be dry.