Thousands of supporters fill streets of Lahore in an unprecendented show of solidarity. 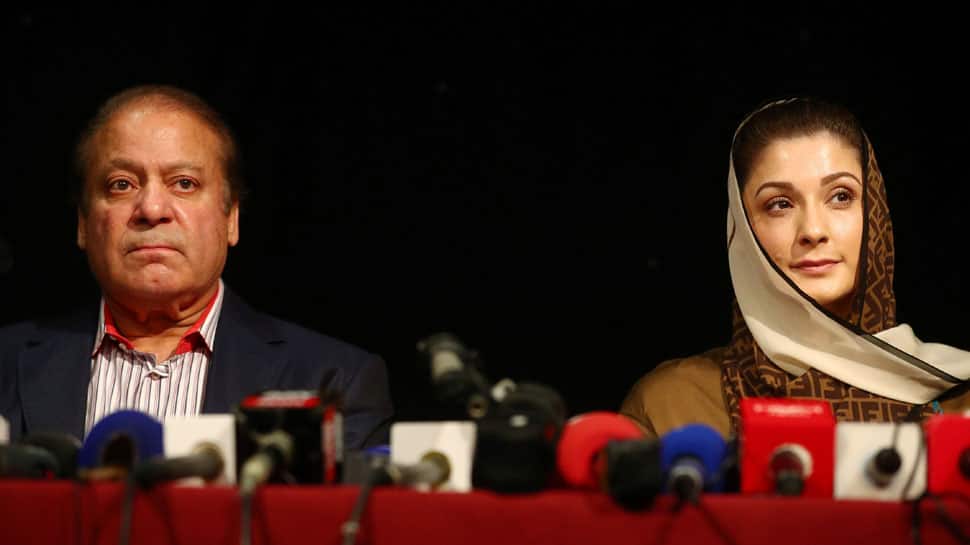 Ousted Prime Minister of Pakistan, Nawaz Sharif, appears with his daughter Maryam, at a news conference at a hotel in London (Reuters photo)
Share:
Follow Zeenews on

Lahore/Islamabad: In an unprecedented scenario, thousands of supports and PML-N workers stepped out on streets showing solidarity as Pakistan's former Prime Minister Nawaz Sharif and his daughter Maryam Nawaz surrendered to authorities in Lahore on Friday night.

The Etihad flight the supremo of the Pakistan Muslim League and his daughter landed at Lahore's Allama Iqbal Airport at 9:15 IST, nearly three hours late from the scheduled arrival.

The father-daughter duo surrendered to a team of National Accountability Bureau (NAB) – the country's anti-graft body. The duo's passports were seized by a three-member FIA team, and both were permitted to meet Begum Shamim Akhtar, Sharif's mother, in the airport lounge.

A private chopper flew them to New Islamabad airport, from where they were taken to Adiala jail, on the outskirts of Rawalpindi. A helipad has been prepared near the jail and the entire area has been cordoned off by the security forces. Maryam is likely to be moved to Sihala Rest House on outskirts of Islamabad.

Security has been beefed up in both Lahore and Islamabad with more than 10,000 personnel on standby. Mobile and internet services have been discontinued in Lahore.

“This is unprecedented. By returning to Pakistan, Sharif has played a winning shot. Even the most popular politician Benazir Bhutto refrained from returning home, fearing jail-term,” senior Geo TV Journalist Nusrat Amin told Zee News on the phone.

“Thousands of PML-N supporters have landed up outside the airport. So many people coming out on streets for Sharif and Maryam... this hasn't happened is unprecedented,” he added.

Ahead of Pakistan general elections on July 25, Sharif (68) and his daughter Maryam (44) were convicted in the Evenfield properties case for ownership of four luxury flats in London. Nawaz Sharif was sentenced to 10 years in jail in the corruption case while daughter Maryam has been given a 7-year jail term. Son-in-law Safdar also received a year's prison sentence.

Earlier Sharif and Maryam flew to the UAE capital from London, where Sharif's wife Kulsoom, suffering from throat cancer, is battling for her life.

The two were convicted on July 6 in the Evenfield properties case linked to the Sharif family's ownership of four luxury flats in London.

Sharif's PML-N party, led by its President and Sharif's younger brother Shahbaz, today managed to take out a massive rally despite imposition of Section 144 that bars assembly of more than five people. The PML-N workers joined in the rally from different points in Lahore.

Close to the airport, Sharif's supporters clashed with police which otherwise did not stop them from removing containers.

Earlier, at Abu Dhabi airport while waiting to change planes, Sharif said: "What credibility will these elections have when the government is taking such drastic action against our people and this crackdown is taking place all over the country?"

In a video message, tweeted by Maryam, the former premier urged his followers to stand with him and "change the fate of the country".