A powerful car bomb exploded outside the house of the 2008 Mumbai terror attack mastermind and banned Jamat-ud-Dawachief Hafiz Saeed in Pakistan's Lahore on June 23 afternoon, killing at least three people and injuring 21 others. 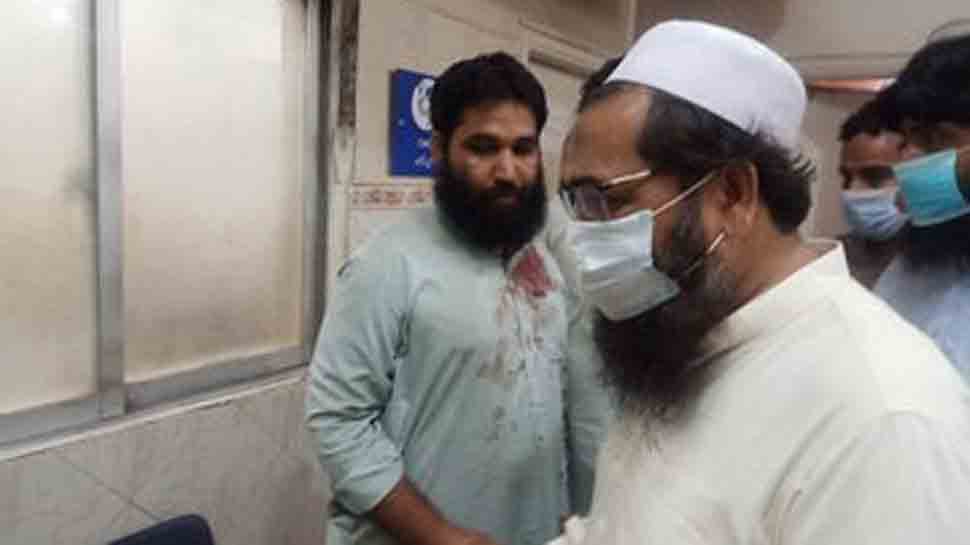 New Delhi: Mumbai terror attack mastermind and banned Jamat-ud-Dawa (JuD) chief Hafiz Saeed's son Hafiz Talha was on Wednesday seen arriving at a hospital in Paistan hours after a powerful bomb explosion took place outside his father's house in Lahore. According to reports, Talha met a JuD worker at the hospital who was reportedly injured in the blast.

A powerful car bomb exploded outside the house of the 2008 Mumbai terror attack mastermind and banned Jamat-ud-Dawa (JuD) chief Hafiz Saeed in Pakistan's Lahore on June 23 afternoon, killing at least three people and injuring 21 others. The blast took place at a police picket outside Saeed's residence at the BOR Society in Jauhar Town, resulting in serious injuries to some police officers guarding his house. The windows and walls of Saeed's house were damaged from the impact of the blast, Pakistani media reported.

The blast sparked rumours that Hafiz Saeed was present at his Lahore house. Ghani said at least three people were killed in the car bomb blast while 21 others were injured.

Till now, no group has claimed responsibility for the blast.

A roof of a house caved in because of the impact of the blast, says Rescue 1122. Several cars parked close to the buildings were also damaged. The injured people have been shifted to the Jinnah Hospital where the condition of six of them is said to be critical.

Hafiz Saeed, a UN designated terrorist whom the US has placed a USD 10 million bounty on, has been convicted for 36 years imprisonment in five terror financing cases. His punishment is running concurrently. Saeed-led JuD is the front organisation for the Lashkar-e-Taiba (LeT) which is responsible for carrying out the 2008 Mumbai attack that killed 166 people, including six Americans.

The 71-year-old radical cleric has been serving a jail sentence at the high-security Kot Lakhpat Jail in Lahore for his conviction in terror financing cases.

How long does it take to get a Skilled Visa for Australia?