Police also used tear gas to disperse hundreds of protesters, many dressed in black and wearing now-banned face masks, in Nathan Road, one of the main arteries of Kowloon on the other side of the harbour. 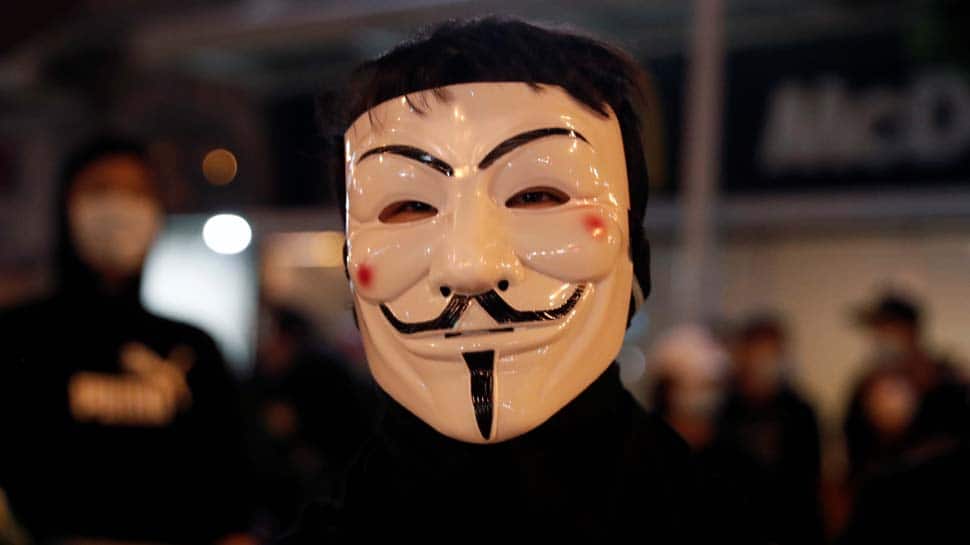 Police also used tear gas to disperse hundreds of protesters, many dressed in black and wearing now-banned face masks, in Nathan Road, one of the main arteries of Kowloon on the other side of the harbour.

Protesters have for five months taken to the streets of the Chinese-ruled city in a sometimes violent response to perceived Chinese meddling with its promised freedoms. This was the first time Lan Kwai Fong had been targeted.

Shouts of "Give us back Halloween!" rang out as police used their shields to push the crowds forward on the sloping, narrow streets, scene of a deadly New Year stampede nearly 27 years ago.

Revellers and some demonstrators were penned in by police trying to keep the protesters away. Many of the protesters wore the Guy Fawkes masks made popular by anti-establishment hackers, others wore the clown make-up of the deranged title figure in the movie "Joker". One was dressed up as Hong Kong leader Carrie Lam in a dog collar and on a leash.

The gridlock infuriated protesters and drinkers alike. "Stop blocking the road. Fuck you!" they shouted at police. "We want to drink. Can`t you let people have some fun for once?"

"Chinese bullies!" another roared. "This is overkill. It’s "Halloween!" "China is an evil Communist country," said Larry, 26, a social worker enjoying a drink in Lan Kwai Fong. "China is trying to put its dirty hands on Hong Kong, trying to stop our freedoms. No!"

Police raised many blue warning banners reading "Disperse or we may use force", before firing volleys of tear gas at protesters in Central, below Lan Kwai Fong, which hung in the air above the narrow streets lined with luxury shopping malls, banks and jewellery shops.

The protesters were dispersed in all directions, but some played cat-and-mouse with police late into the night. Most weekends see hordes of revellers spilling out of the bars and clubs on to the streets in and around Lan Kwai Fong, which got going as an entertainment area in the late 1970s and early 1980s with clubs like "Disco Disco" and "Club `97", named after the year Hong Kong returned from British to Chinese rule.

A stampede during New Year celebrations on December 31, 1992, when thousands had gathered on streets slippery with beer and champagne, killed at least 20 people and wounded scores.

As widely expected, Hong Kong slid into recession for the first time since the global financial crisis in the third quarter, according to data released on Thursday, weighed down by the increasingly violent anti-government protests and the protracted US-China trade war.

Questioned about government plans to relieve the pressure that the protests are putting on businesses in Hong Kong, Lam told a conference the circumstances warranted "exceptional" measures.

Her administration has pledged around HK$21 billion ($2.7 billion) of financial aid for businesses since August, partly from rent and fuel subsidies.

The protesters say Beijing`s is interfering more and more in Hong Kong, which returned from British to Chinese rule under a "one country, two systems" formula intended to guarantee freedoms that mainland citizens do not have.

China denies meddling and has accused foreign governments, including the United States and Britain, of stirring up trouble. China said after a meeting of its top leadership that it would safeguard Hong Kong`s prosperity and protect national security.

Some protesters in Hong Kong have thrown petrol bombs at police, lit fires and vandalised government buildings and businesses, especially those seen as pro-Beijing, during recent demonstrations.

Police have responded with tear gas, pepper spray, rubber bullets, water cannon and sometimes live rounds. In Kowloon, the protests in the Mong Kok area marked two months since police beat protesters on a subway train as they cowered on the floor, CCTV footage of which was widely shown online.

Inflation, not Kashmir is the biggest issue in Pakistan: Gallup-Gilani Survey