Hong Kong is one of the world`s top shopping cities but four months of often violent protests have severely dented that reputation, with more than 100 shops closed, scores vandalised and malls now becoming sites for sit-ins by protesters. 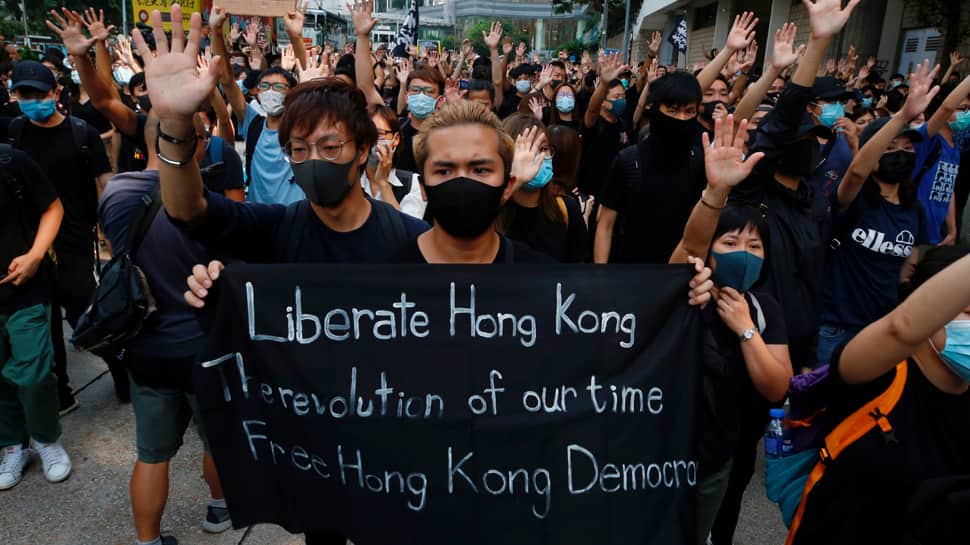 Hong Kong is one of the world`s top shopping cities but four months of often violent protests have severely dented that reputation, with more than 100 shops closed, scores vandalised and malls now becoming sites for sit-ins by protesters.

The Asian financial hub is facing its first recession in a decade, with the tourism and retail sectors hit hardest by the unrest. Protesters are playing cat and mouse with police, organising demonstrations at different locations via social media and stretching security resources. Apple Inc on Wednesday removed an app protesters have used to track police, prompting some to say they may "visit" Apple stores in Hong Kong.

Opposition to a now-withdrawn extradition bill that would have allowed suspects to be sent to China sparked the unrest. But it has widened into a pro-democracy movement driven by fears Beijing is eroding Hong Kong`s freedoms and anger at the city`s government for failing to solve social issues such as unaffordable housing and poor job prospects.

Under a "one country, two systems" formula adopted when Britain returned its former colony to China in 1997, Hong has a high-degree of autonomy and its residents enjoy freedoms that do not exist on the mainland.

The unrest is the city`s worst political crisis since 1997 and poses the biggest popular challenge to Chinese President Xi Jinping since he came to power in 2012.

Hong Kong`s embattled leader Carrie Lam introduced colonial-era emergency laws last Friday, banning face masks that protesters use to shield their identities, which sparked some of the worst violence since the unrest started. Many Hong Kongers fear the emergency laws will be expanded eroding their rights.

Protests planned for late Thursday include some in support of Taiwan on its National Day and rallies against perceived police brutality, with protesters expected to wear eye patches to show solidarity with a young protester injured in clashes.

"The violence has been accelerating a lot. I think they (police) are really damaging the law and the legal system," said David, a 27-year-old accountant, wearing a black mask covering the lower half of his face and clutching a sign saying "Free Hong Kong".

Police have fired live rounds and used baton charges and water cannons to quell the unrest. Two teenagers have been shot. Police fired 367 tear gas canisters over the long weekend, when tens of thousands of protesters took to the streets.

President Tsai Ing-wen, in a National Day speech in Taipei, said Taiwan had rejected the "one country, two systems" formula Beijing suggested could unify it with the mainland, saying it had set Hong Kong "on the edge of disorder". Beijing regards Taiwan as a wayward province and has not renounced the use of force to bring it into the fold.

Scores of Hong Kong shops remain boarded up after being trashed over the weekend, anti-government graffiti is scrawled over bus stops and buildings, and some streets are still strewn with broken glass and twisted metal debris.

Protest violence has often targeted the MTR mass transit system, torching stations and damaging ticketing machines. The MTR has been accused of closing stations at the government`s behest to stop demonstrators gathering.

The MTR said the Airport Express would not stop at stations between Hong Kong and the airport on Thursday night and check-in services in Kowloon would be suspended. Besides calling for the protection of their civil liberties, many young protesters are also incensed at Hong Kong`s widening inequality, sky high property prices and poor job prospects.

Hong Kong is world’s most expensive property market, with prices rocketing over 200% in the past decade, driven by limited housing supply and mainland Chinese buyers. Tiny living spaces are common, some of the poorest living in cage homes - wire mesh hutches stacked on top of each other. A protester last month scrawled graffiti reading: "7K for a house like a cell and you really think we out here scared of jail".

The popularity of Hong Kong leader Lam has plunged to a record low of 22.3 points out of 100, the lowest of any post-colonial chief executive, according to a Hong Kong Public Opinion Research Institute survey this week. The survey was conducted before the emergency laws and latest violence.

The unrest has resulted in tourist numbers plummeting, a slew of events cancelled or moved elsewhere, and hit sport. Mainland Chinese visitors, Hong Kong`s most important tourism source, have more than halved between July and September, ForwardKeys travel analytics said on Thursday.

"The demonstrations are delivering a devastating blow to the economy of the Special Administrative Region," said Jameson Wong, APAC Business Development Director, ForwardKeys. China has accused some foreign governments, including Britain and the United States, of fanning anti-China sentiment over Hong Kong.