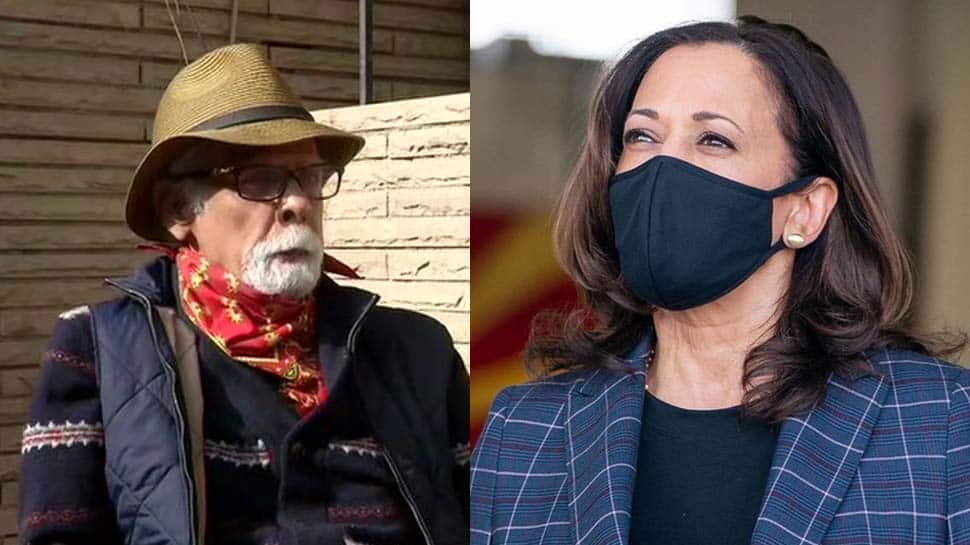 Kamala Harris will take oath as the first woman Vice President of the USA on Wednesday, amidst heightened security concerns after a mob of pro-Trump extremists violently breached the Capitol two weeks ago. The historic inauguration will be held under the unprecedented security umbrella of more than 25,000 National Guards. They have transformed the capital into a garrison city, mainly because of the threat of more violent protests by the supporters of outgoing President Donald Trump, who is skipping the event.

There's no message I can give, I didn't help her become VP. She did all on her own. All that I'll tell her is 'do whatever Shyamala(Kamala Harris' mother)taught you. You've been doing fine so far, keep it up.' It's all I can say: Uncle of US VP-elect Kamala Harris, G Balachandran pic.twitter.com/dRYjMyOq64

Harris, 56, will be sworn in as 49th Vice President of the United States by Justice Sonia Sotomayor, the first Latina member of the Supreme Court. She will make history as the first female, first Black and first Indian American vice president of the United States. She will be sworn in on two Bibles--one that belonged to a close family friend named Regina Shelton and another that belonged to Thurgood Marshall - the country's first African American Supreme Court justice.

Harris has described herself as "a proud daughter of California" and thanked the people of America's most populous state for their support. Harris served as a United States senator from California from 2017 until 2021, and as attorney general of California from 2011 to 2017. Harris started fighting for working families in California's Alameda County District Attorney's Office, where she focused on prosecuting child sexual assault cases. From there, she became the first Black woman elected as San Francisco's District Attorney.

In 2010, Harris became the first Black woman to be elected Attorney General of California, overseeing the country's second-largest Justice Department after the US Department of Justice. When Democratic presidential candidate Joe Biden picked Harris in August 2020 as his running mate, the then California Senator was just the third woman to be selected as the vice president on a major party ticket.

Harris was born to two immigrant parents: a Black father and an Indian mother. Her father, Donald Harris, was from Jamaica, and her mother, Shyamala Gopalan, who immigrated to the US from Chennai in 1958. Harris defines herself simply as 'American'.

Chief Justice John Roberts will administer the oath of office to 78-year-old Biden just after the clock strikes 12 (local time) at the West Front of the Capitol - the traditional location for presidential inaugural ceremonies. Biden will take the oath on his 127-year-old family Bible, which will be held by his wife, Jill Biden.

Biden, who will be the oldest president in American history, will deliver his first presidential address to the country shortly after taking the oath. The historic speech, with the theme of unity and healing, has been prepared by his Indian-American speech writer Vinay Reddy.

The ceremony is likely to be attended by former presidents Barack Obama, George W Bush and Bill Clinton. Former first ladies Michelle Obama, Laura Bush and Hillary Clinton are also set to attend the event. President Trump, a Republican, has said he will not attend the inauguration. He, however, extended "best wishes" to the new administration in a farewell video address on Tuesday.

"We extend our best wishes, and we also want them to have luck - a very important word," Trump, 74, said on the eve of his departure from the White House for his Mar-a-Lago resort in Florida. This year the transition stands out for its acrimony. The process usually starts straight after the election, but it started weeks late after Trump refused to accept the result of the November 3 election won by Biden, a Democrat.

The scaled-down inauguration is expected to begin around 11 am (US time). With an invocation by Leo Jeremiah O'Donovan, a Jesuit priest who is a close friend of the Biden family. Andrea Hall, the first African American female firefighter to become captain of the Fire-Rescue Department in South Fulton, Georgia, will recite the Pledge of Allegiance.

Lady Gaga will sing the national anthem and Amanda Gorman, who became the country's first Youth Poet Laureate in 2017, will read a poem she has written for the occasion called "The Hill We Climb." She would be followed by a performance by actress-singer Jennifer Lopez.

Silvester Beaman, pastor of Bethel African Methodist Episcopal Church in Wilmington, Delaware, will deliver a benediction. After the swearing-in ceremony, Biden and Harris will attend a traditional Pass in Review with members of the military on the East Front of the Capitol, signifying the peaceful transfer of power to a new commander-in-chief.

Biden, Harris and their spouses will visit Arlington National Cemetery in Virginia, where they will lay a wreath at the Tomb of the Unknown Soldier. After the wreath ceremony, they will head to the White House, where they will get a presidential escort. That will kick off the virtual "Parade Across America," featuring performances from all 56 states and territories.

Traditionally, when the new president arrives at the Oval Office and occupies the chair in front of the resolute desk, a letter from his predecessor awaits him. Given the circumstances that Trump is leaving, speculation is rife that there might not be any letter at all. Trump not only refused to concede the elections for more than two months but also did not invite his successor to the White House as is the custom here.

At night, Biden is forgoing the traditional inaugural balls because of the COVID pandemic, and he will instead take part in a television event called "Celebrating America." Biden enters the White House with the top challenge to lift the country from the devastation of a raging pandemic that has killed more than 400,000 Americans and thrown millions into economic distress. The revival of the economy, which has been badly bruised by the pandemic, is another challenge that he faces.

Meanwhile, the American capital has been virtually turned into a garrison city, amidst multiple reports of threats and more armed violence by pro-Trump supporters to disrupt the events. The area in and around Capitol Hill, a large part of Pennsylvania Avenue and the White House has been made out of bounds for the general public with eight-feet high iron barricades being erected.

In addition to converting downtown Washington D.C. Into a fortress, security in and around 50 State Capitols has also been put on high alert to ensure a peaceful transition of power. US defence officials say they are also worried about an insider attack or other threat from service members involved in securing Biden's inauguration, prompting the FBI to vet all of the 25,000 National Guard troops deployed for the event.