The agreement includes an immediate 6 percent across-the-board pay raise for teachers, slightly less than the 6.5 percent hike they sought. 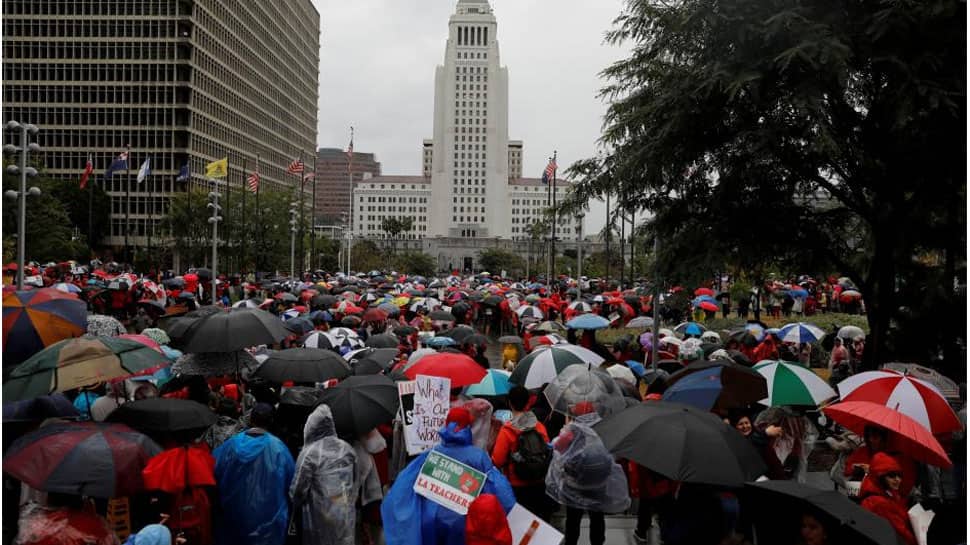 LOS ANGELES: The union for more than 30,000 striking Los Angeles teachers clinched a tentative contract deal with the second-largest US school district on Tuesday, paving the way for classes to resume for nearly half a million students after a weeklong walkout.

A ratification vote by the teachers on the 3-1/2-year deal commenced Tuesday evening, United Teachers Los Angeles union spokeswoman Kim Turner said. If approved, as expected, the teachers would return to work on Wednesday at the city`s 1,241 schools.

The deal, labeled "historic" by both Mayor Eric Garcetti, who mediated the talks, and Los Angeles School District (LAUSD) Superintendent Austin Beutner, accedes to many of the union`s demands for improving classroom conditions that all sides agreed have suffered from decades of underfunding.

The agreement includes an immediate 6 percent across-the-board pay raise for teachers, slightly less than the 6.5 percent hike they sought. It also calls for phasing in class-size reductions while hiring more librarians, nurses and counselors - pillars of the union`s position during five days of marathon negotiations that ended at dawn on Tuesday.

The district also agreed to remove a provision of the existing contract that allows it to unilaterally waive class-size caps previously agreed to. In addition, the school board would consider a non-binding resolution calling for the state legislature to cap the expansion of independently operated charter schools in Los Angeles, which the union has argued are diverting resources from traditional classroom instruction.

Union President Alex Caputo-Pearl told a celebratory rally of thousands of teachers outside City Hall they had achieved a major victory in the city`s first teachers strike since 1989, achieving the bulk of their contract objectives while galvanizing public support. "It is very rare that you go to the bargaining table with as many demands as we had and you win almost every single one of them," Caputo-Pearl told the crowd.

Leaders of the school district - which does not answer to the mayor - had insisted throughout the talks they largely supported the union`s goals but lacked sufficient money to fully meet the demands without risking insolvency.

Garcetti announced the agreement at a City Hall news conference with Beutner and Caputo-Pearl. Beutner became a target of criticism from teachers by resisting their demands to commit more of the district`s $1.8 billion reserve to easing overcrowded classrooms and hiring more support staff. He said the reserve was needed to maintain financial stability in the face of rising pension and healthcare costs.

"We`re spending every nickel we have," Beutner said at the news conference.

The tentative contract agreement calls on the school district to hire 300 more nurses by the 2020-21 academic year, which union officials said would put a nurse at every school, as they sought. According to its accounting, the district will spend $403 million just to hire more nurses, librarians and counselors and to reduce class sizes, spokeswoman Barb Jones said in an email.

Education funding in California is based on daily student attendance, which dwindled to a fraction of normal levels during the six school days of the strike, costing the district about $151.4 million, LAUSD said.

New York City spends more than $20,000 per public school student per year, compared with $16,000 in California, Beutner said, calling the difference "an opportunity gap." The Los Angeles school board is expected to formally approve the deal on Jan. 29.

Union supporters, and even school district officials, have credited the striking teachers with helping reawaken the public and politicians around the country to widespread difficulties facing schools in California and elsewhere.

Teachers staged walkouts over salaries and school funding in several US states last year, including West Virginia, Oklahoma and Arizona. In contrast to those states, the Los Angeles teachers faced a predominantly Democratic political establishment more sympathetic to their cause.

Labor tensions are still simmering in other big-city school districts. The teachers` union in Denver held a strike authorization vote on Saturday after rejecting a contract offer. Results will be announced on Tuesday.

Teachers in Oakland, California, were expected to vote on whether to strike later this week.

4 held in New York state for 'plotting' against Muslims