Former Defence Secretary-turned President had selected Ruwanveli Mahaseya announced that he would soon form a new government to implement his policies. 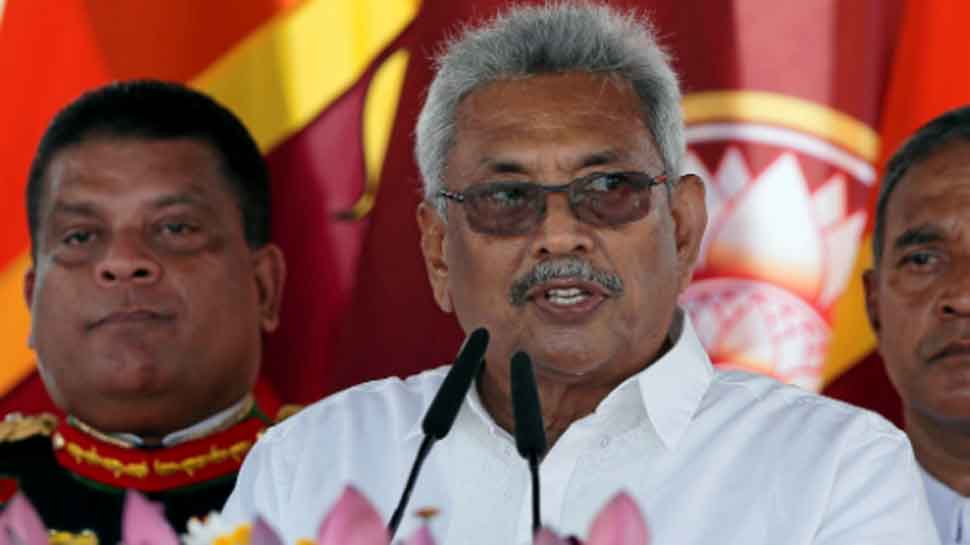 Colombo: After swearing-in as the seventh Executive President of Sri Lanka, Gotabaya Rajapaksa stressed that Sri Lanka wants to stay out of conflicts among the world powers and would remain neutral in its foreign policy.

"We will maintain friendly and cordial relationship with all the nations and we don`t want to be caught between power struggles of international politics among different nations," Rajapaksa said after he took oath at the historic Sinahala Buddhist city of Anuradhapura.

"In maintaining relationships with us, we urge all nations to respect our sovereignty," he added.

Rajapaksa announced he would soon form a new government to implement his policies.

Former Defence Secretary-turned President had selected Ruwanveli Mahaseya, a massive temple built by valiant king Dutugemunu in the north-central city of Anuradhapura, situated 200 km from capital Colombo. He was sworn in beside the statue of King Dutugemunu (161 BC-137 BC). According to historical chronicle Mahawamsa, the King unified the country overthrowing Tamil prince Ellalan from Chola Kingdom.

"I was able to address the nation as the President in front of the statue of one of the greatest kings of Sri Lankan kingdom Dutugemunu because of the historical mandate given by the people," said Rajapaksa. He said the main reason behind his victory was the blessing he received from Buddhist monks.

The elections were the first after Easter Sunday attacks carried out by ISIS-led eight local suicide bombers on April 21. Rajapaksa reiterated that national security was his top-most priority. "I, as the Executive President, head of the tri-forces and the Defence Minister take the responsibility of you and your children`s security. He vowed to eliminate terrorism and prevent any similar attack. The coordinated multiple bomb attack on three Christian churches and hotels killed over 250 and injured over 400 Sri Lankans and foreign nationals.

Rajapaksa won the November 16 Presidential Election mainly from the Sinahala majority vote but was completely defeated in minority Tamil and Muslim provinces. Conceding his defeat by the minorities, Rajapaksa said: "The response I received from the minority Tamils and the Muslims to join my victory mainly based on Sinhala majority was not up to my expectation".

Rajapaksa said from the beginning, he knew that the main factor behind his victory would be the Sinhala majority. "Even though I knew that I could win from the Sinhala majority votes, I made a special appeal to the Tamil and Muslim communities to be a part of that victory. But the response I received was not up to my expectation," Rajapaksa said addressing in native Sinhala language to a gathering comprising a large number of Sinhala Buddhist monks, foreign dignitaries and some members of his government and supporters.

However, Rajapaksa said: "As your President, I urge you to join me as true natives of this country."

With nearly 1.4 million votes` lead, Rajapaksa won all except one district of Sinhala majority in southern Sri Lanka while his opponent Sajith Premadasa won nine districts out of which eight are from Tamil majority northern and Muslim majority eastern provinces. Rajapaksa was also defeated in three Muslim majority districts; Trincomalee, Batticaloa and Ampara.

Out of 25 administrative districts, Gotabaya won 16 but was heavily defeated in five northern districts of Jaffna, Kilinochchi, Mulaitivu, Vavuniya and Mannar where 26-year-long ethnic war against Tamil rebels, the Liberation Tigers of Tamil Eelam (LTTE), was fought.

Gotabaya, as the powerful Defence Secretary in his brother Mahinda Rajapaksa`s government, oversaw the military defeat of rebels in May 2009.

While ensuring the protection of rights of other religions and ethnic groups, Rajapaksa said he is duty-bound to protect Buddhism and Sinhala culture. Stating that he hailed from Sinhala Buddhist background, Rajapaksa said the teaching of Buddhism is part of his thoughts and behaviour.

Echoing Sinhala nationalist sentiments, Rajapaksa in his address said: "I am duty-bound and committed myself to protect and develop Buddhism during my tenure. We must protect the Sinhala culture and heritage at all times". He noted that he would provide state patronage to the protection of historical values and practices.

Rajapaksa, who is known for his military-disciplined administration as the Defence Secretary and the man who promoted capital Colombo as a green city under former Rajapaksa regime, stressed "corruption would never be tolerated under my administration".

"The government should always set an example to society. Professionalism and efficiency should be the cornerstone of government administration and meritocracy and technocracy should be promoted at all times," he said.

"We have a bigger responsibility ahead of us and a massive load of work to be completed within a short time. There is no challenge that can not be achieved," said Rajapaksa.

During his speech, he thanked his elder brother and former President Mahinda Rajapaksa for support and wished him on his 74th birthday on Monday.

Immediately after his election victory on Sunday (Nov 17), Indian Prime Minister Narendra Modi was the first among world leaders to congratulate Rajapksa with twitter message. "Congratulations @GotabayaR on your victory in the Presidential elections," said PM Modi adding "I look forward to working closely with you for deepening the close and fraternal ties between our two countries and citizens, and for peace, prosperity as well as security in our region".

The Indian PM also has extended an invitation to Rajapaksa to visit India and it has been accepted.

Meanwhile, Rajapaksa was congratulated by the US ambassador to Sri Lanka Alaina B. Teplitz. Posting a twitter message, Ambassador Teplitz stated: "We look forward to working with President-elect Gotabaya Rajapaksa on issues of good governance, economic growth, the advancement of human rights and reconciliation in support of a strong, sovereign Sri Lanka".

Rajapaksa was a US citizen, but he renounced his foreign citizenship to contest the polls.