The visit is part of Kim`s effort to build foreign support after the breakdown of a second US-North Korea summit in Vietnam in February meant no relief on sanctions for North Korea, analysts said. 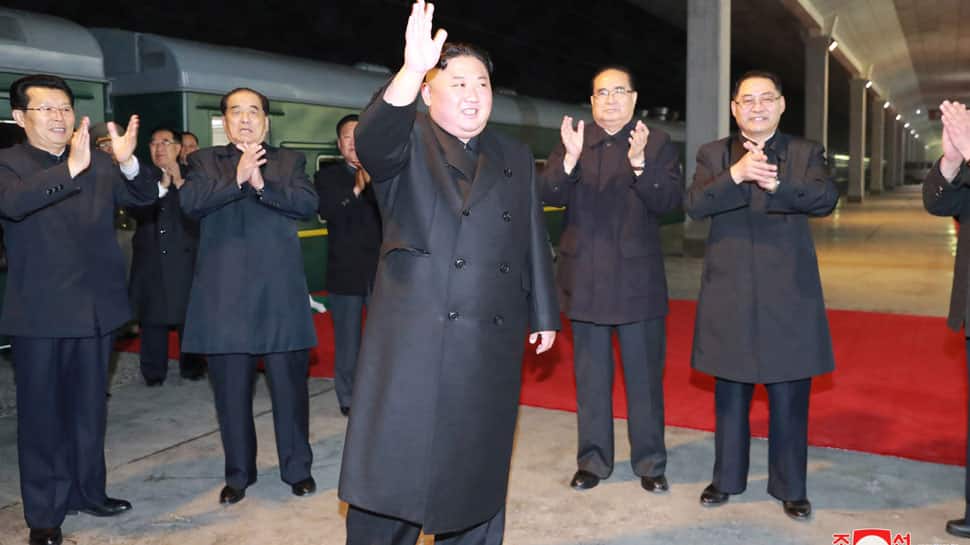 MOSCOW/VLADIVOSTOK: North Korean leader Kim Jong Un and Russian President Vladimir Putin will meet on Thursday in the Russian Pacific port of Vladivostok to discuss the international standoff over Pyongyang`s nuclear programme, a Kremlin official said. The visit is part of Kim`s effort to build foreign support after the breakdown of a second US-North Korea summit in Vietnam in February meant no relief on sanctions for North Korea, analysts said.

The summit will be the first between Putin and the North Korean leader. The nuclear row, and how to resolve it, would be the main item on the agenda, Kremlin aide Yuri Ushakov told reporters. "In the last few months the situation around the peninsula has stabilised somewhat, thanks in large part to North Korea`s initiatives of stopping rocket testing and closing its nuclear test site," Ushakov said. "Russia intends to help in any way possible to cement that positive trend."

Vladivostok is the closest major Russian city to the short stretch of border that Russia and North Korea share and can be reached from the border by train, Kim`s preferred mode of international transport.

Russia has for years been involved in efforts to persuade North Korea to give up its nuclear programme. It was involved in so-called six-party talks - along with North and South Korea, Japan, the United States and China - that was last held in 2009. "The United States and the international community is committed to the same goal - the final, fully verified denuclearisation of North Korea," a US State Department official said when asked about Kim`s latest summit.

"It is Chairman Kim’s commitment to denuclearisation upon which the world is focussed," he said.

The spokesman said Russian Deputy Foreign Minister Igor Morgulov and US Special Representative for North Korea Stephen Biegun would also continue their dialogue "to bridge any gaps on the way forward?."

South Korea`s foreign ministry said it understood the agenda would include Russia-North Korea relations, denuclearisation, and regional cooperation. "Russia shares our viewpoints such as the achievement of complete denuclearisation on the Korean peninsula and the settlement of permanent peace," foreign ministry spokesman Kim In-chul said in Seoul.

"I hope that the summit will be an opportunity that contributes to positive progress."

Kim Jong Un is probably looking to prove that he is still sought after by world leaders after the failed Hanoi summit with U.S. President Donald Trump and that he has more options, said Artyom Lukin, a professor at Far Eastern Federal University. The North Korean leader did not want to look too dependent on Washington, Beijing and Seoul, he said. "As for Russia, the Putin-Kim summit will reaffirm Moscow`s place as a major player on the Korean peninsula. This meeting is important for Russian international prestige," Lukin said.

Putin previously held a summit in Russia with Kim Jong Un`s father and predecessor, Kim Jong Il, in 2002. Kim Jong Il visited Russia again in 2011, when he was hosted by Dmitry Medvedev, the Putin lieutenant who at the time was serving as Russian president.

Online media that monitor North Korea reported that the venue for the summit would be the Far Eastern Federal University, on an island that is connected to the mainland part of Vladivostok by a bridge.

The bridge was built in time for the 2012 Asia-Pacific Cooperation Summit, which took place on the same site. The sports complex at the university was closed on Tuesday and workers were seen bringing in pieces of furniture, a Reuters TV crew at the site reported. A white tent had been erected next to the sports complex.

Security guards at the entrance to the campus were stopping and searching vehicles as they drove in. There were no signs of preparation at Vladivostok railway station. However at Khasan, a Russian settlement where the train line crosses the border, the state flags of Russia and North Korea were fluttering from the station building on Tuesday. A set of mobile steps for alighting from a train was positioned on the platform edge.