The discovery of human footprints, if confirmed, would mark the oldest trace of our species yet found in the Arabian Peninsula, which sits at the gateway to early humans’ spread around the world, 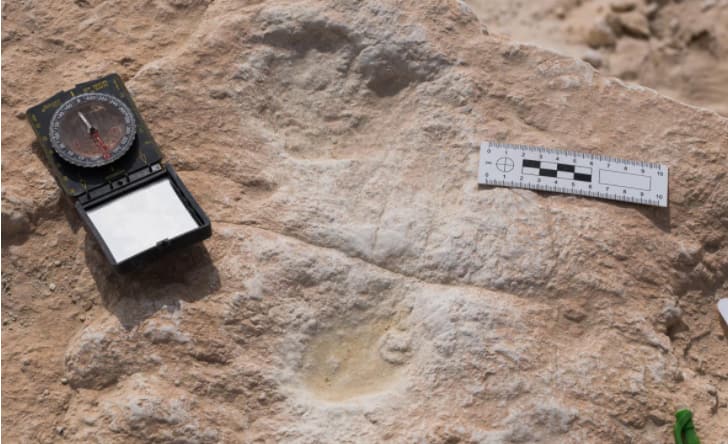 New Delhi: In the dunes of northern Saudi Arabia, human footprints scattered across a patch of dry ground have been discovered. The discovery of human footprints, if confirmed, would mark the oldest trace of our species yet found in the Arabian Peninsula, which sits at the gateway to early humans’ spread around the world, according to a National Geographic report.

Citing a new study published in Science Advances, it reported about the frozen footfalls that preserve a striking snapshot of time some 115,000 years ago. Animals and humans congregated near a shallow lake, perhaps with a shared purpose of slaking thirst and sating hunger.

A team of scientists surveying the region almost ignored them in 2017, but upon further examination, they realized that the depressions were left by an array of ancient animals, and among them were traces of our own species, Homo sapiens, the report said.

Notably, the Arabian Peninsula has vast and arid deserts that did not provide a favourable environment to early people and animals. The studies conducted in the last 10 years have shown that this was not always the scenario, and the place was much greener and humid.

"At certain times in the past, the deserts that dominate the interior of the peninsula transformed into expansive grasslands with permanent freshwater lakes and rivers," said study co-author Richard Clark-Wilson of Royal Holloway, as quoted by news agency AFP.

Mathew Stewart, of the Max Planck Institute for Chemical Ecology, Germany, the first author, said the footprints were found on this PhD fieldwork in 2017 after the erosion of overlying sediments at an ancient lake known as 'Alathar' ("the truce" in Arabic). "Footprints are a unique form of fossil evidence in that they provide snapshots in time, typically representing a few hours or days, a resolution we tend not to get from other records," Stewart is quoted as saying.

"A closer look revealed the elongated prongs of camels, and perhaps faint traces from giant buffalo and ancient horse relatives. As the team was packing up for the day, they spotted what became the most exciting find: Seven imprints likely left by members of our own species," the National Geographic report said.

The footprints aren’t the oldest evidence of humans outside of Africa, but the vignette inscribed in mud reportedly provides a peek into the once lush landscape and creatures that may have greeted humans during their early forays.

The research in Saudi Arabia is part of a more than decade-long effort led by Michael Petraglia, a human evolution researcher at the Max Planck Institute, who led the team, to unearth hominin history in the Arabian Peninsula. The study is related to understand our species’ first steps out of Africa.

Most non-African people reportedly trace their genetic roots to a wave of Homo sapiens that ventured from the continent roughly 60,000 years ago, but they weren’t the first to leave.

Donald Trump to block US downloads of TikTok, WeChat on September 20: Reports