On August 28, Johnson had ordered the suspension for five weeks, saying it was to allow a Queen's Speech to outline his new Brexit policies. 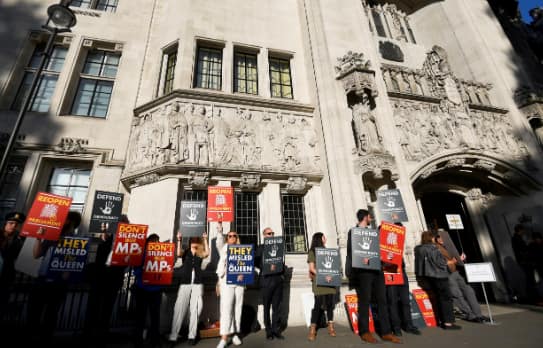 London: In a historic ruling, the UK's Supreme Court on Tuesday said that Prime Minister Boris Johnson's decision to suspend or prorogue the country`s Parliament for five weeks in the lead-up to a Brexit deadline, was unlawful.

On August 28, Johnson had ordered the suspension for five weeks, saying it was to allow a Queen`s Speech to outline his new Brexit policies. The shutdown began on September 10, the BCB reported.

"This means that when the Royal Commissioners walked into the House of Lords it was as if they walked in with a blank sheet of paper.

"The prorogation was also void and of no effect. Parliament has not been prorogued. This is the unanimous judgement of all 11 justices."

"The effect on the fundamentals of our democracy was extreme," she added.

According to the ruling, Parliament could be reconvened immediately.

In reaction, Downing Street said it was "currently processing the verdict".

Tuesday`s ruling came after the three-day hearing at the Supreme Court dealt with two appeals - one from campaigner and businesswoman Gina Miller, the second from the government.

The challenge in the Scottish Court was brought by a cross-party group of MPs and peers led by the Scottish National Party`s (SNP) Joanna Cherry.

Cherry on Tuesday called the verdict was a "huge victory for the rule of law and for democracy", while Miller said that "this prime minister must open the doors of Parliament tomorrow", reports the BBC.

Opposition Labour Party leader Jeremy Corbyn has called for Johnson`s resignation and asked him to "obey the law, take no-deal off the table and have an election to elect a government that respects democracy".

Reacting to the ruling, Speaker of the House of Commons John Bercow says that Parliament must convene without delay.

"To this end, I will now consult the party leaders as a matter of urgency."