Convicted of breaking Myanmar`s Official Secrets Act, Reuters journalists Wa Lone, 33, and Kyaw Soe Oo, 29, had spent more than 500 days in jail when they were freed on Tuesday. 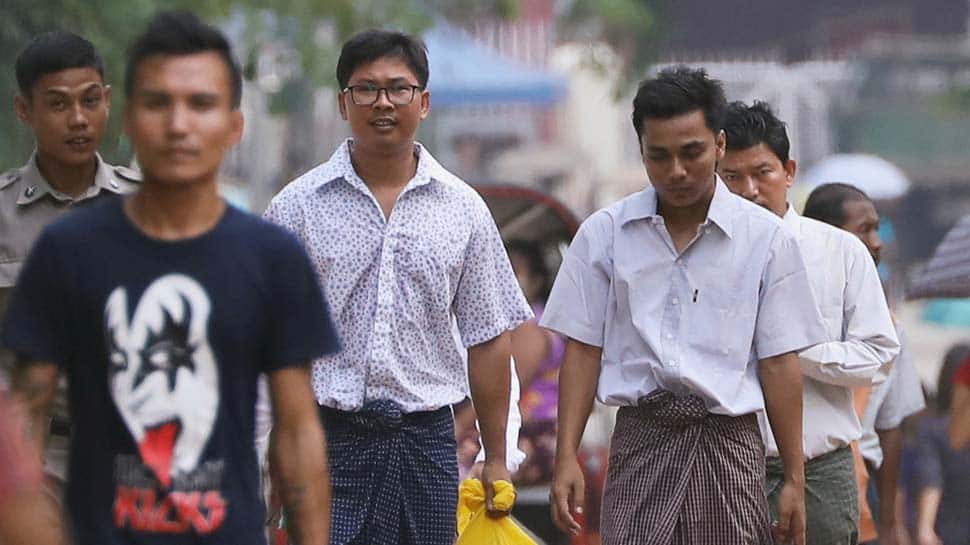 YANGON: Convicted of breaking Myanmar`s Official Secrets Act, Reuters journalists Wa Lone, 33, and Kyaw Soe Oo, 29, had spent more than 500 days in jail when they were freed on Tuesday.

They had been convicted in September and sentenced to seven years in jail, in a case that raised questions about Myanmar`s progress toward democracy and sparked an outcry from diplomats and human rights advocates.

President Win Myint has pardoned thousands of prisoners in amnesties since last month. It is customary in Myanmar for authorities to free prisoners across the country around the time of the traditional New Year, which began on April 17.

Wa Lone and Kyaw Soe Oo were arrested on the evening of Dec. 12, 2017. At the time they were detained, outside a restaurant in Yangon, they were working on an investigation into the massacre of 10 Rohingya Muslim men and boys in the conflict-torn Rakhine State.

During months of preliminary hearings and a trial last year, defence lawyers had argued the reporters were jailed in a "pre-planned and staged" attempt to silence their reporting.

One prosecution witness, a police officer, testified that police planted documents on the reporters in order to frame them. Another officer told the court, without explanation, that he had burned notes made at the time of the journalists` arrests.

Trial Judge Ye Lwin convicted the two journalists in September, determining that "confidential documents" the prosecution said were found on the two would have been useful to "enemies of the state and terrorist organisations".

The reporters maintained their innocence throughout the trial and the belief that they would be set free. During the court hearings, U.N. Secretary General Antonio Guterres and leaders from several Western countries had called for the reporters` release.

On the day he and Kyaw Soe Oo were sentenced, a handcuffed Wa Lone told the crowds gathered, some of whom were banging on the police truck carrying the pair away, that he had "no fear".

"I believe in justice, democracy and freedom," he said.