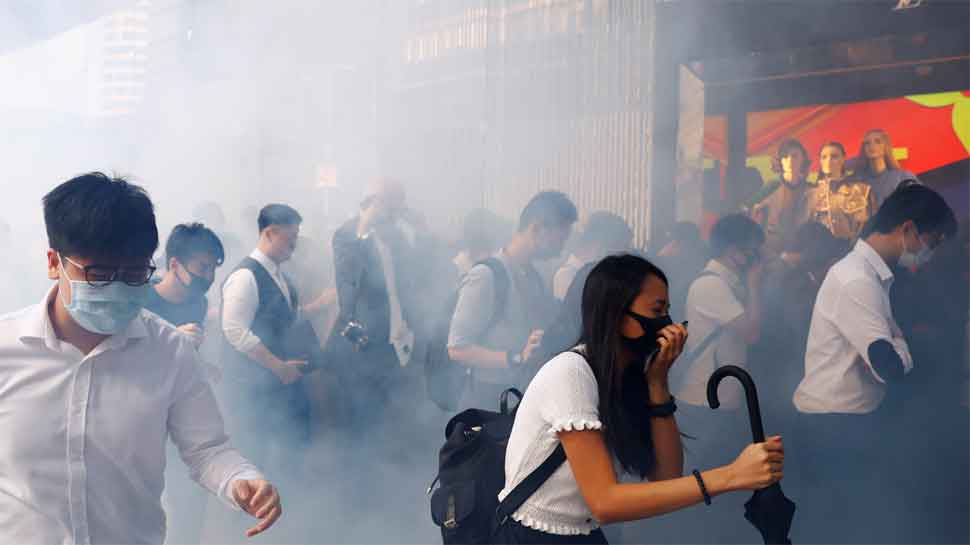 Protesters shouted abuse at "black police" in Cantonese wherever officers appeared, referring to perceived brutality against demonstrations in the Chinese-ruled city that show no sign of let-up after more than five months.

Violence spilled out onto the streets of Tuen Mun outside the "V city" mall, with running battles between riot police and protesters. Now TV showed pictures of a circular, red welt and bruise on the upper arm of one of its reporters who said she had been hit by a tear gas canister in Tsuen Wan, to the west of the New Territories, where police fired tear gas late into the evening to clear the streets.

The rail station was closed in Sha Tin, amid scuffles between police and protesters young and old, on a day of planned shopping mall protests throughout the territory. Shopping districts across the harbour on the main island were quiet.

Protesters daubed graffiti and damaged shops at Festival Walk in Kowloon Tong and "stormed" stores in Tsuen Wan, police said. The violence spread to the Kowloon district of Mong Kok, one of the world`s most densely populated areas. Police used water cannon and volley after volley of tear gas to try to clear the main artery of Nathan Road, which was littered with loose bricks under the bright, neon lights.

Police also fired tear gas late at night in the New Territories district of Tai Po, north of Sha Tin. Protesters are angry about what they see as police brutality and meddling by Beijing in the former British colony`s freedoms, guaranteed by the "one country, two systems" formula in place since the territory returned to Chinese rule in 1997. China denies interfering and has blamed Western countries for stirring up trouble.

Thousands of people gathered at a Saturday night vigil for "martyrs", following the death of a student in hospital this week after falling from a car park during a protest. Many called for revenge.

The student, Chow Tsz-lok, 22, fell from the first floor building in the bay-side eastern suburb of Tseung Kwan O, where police fired tear gas into the night on Sunday as protesters threw bricks, built street barricades and hurled abuse.

Thousands gathered in Chater Garden, in Central on Hong Kong island, to mourn Chow. Pastor Yuen Tin Yau said Chow`s family had decided to donate his organs "Yes, we are hopeless, we are restless. But we won`t give up. Of course, we want to see this moment end in harmony and in justice," said protester Tanya Yeu, 55. "Perhaps there is a long way to go, but we will hang in, we will hang in."

Seven pro-democracy city lawmakers have been detained or face arrest and are due to appear in court on Monday on charges of obstructing a May meeting of the local assembly, according to police and several of the lawmakers.

"We believe that the government together with the police, as well as the pro-establishment camp, they are trying to escalate the anger of Hong Kong people in order to cancel or even to postpone the upcoming district council election," Tanya Chan, a pro-democracy lawmaker, told reporters on Saturday.

One of the arrested lawmakers, Gary Fan, said the detentions were the result of "political prosecutions and judicial crackdowns" by Hong Kong chief executive Carrie Lam.
The elections are due on Nov. 24.

The colony of Hong Kong island and the Kowloon peninsula, acquired after two "opium wars" with China, was expanded to include the much larger, rural New Territories on a 99-year lease in 1898. Britain returned all the land to China when that lease expired in 1997.

Protesters have called for a general strike on Monday and urged people to block public transport, although such calls in the past have often come to nothing. They have also demanded an independent inquiry into police tactics, something Lam has refused.

A five-member international panel said an analysis of the Hong Kong police watchdog, the Independent Police Complaints Council, indicated a shortfall in its "independent investigative capability" to look into policing during the protests.