Zee News journalist Aditi Tyagi repeatedly tried to ask a question to the Pakistan Prime Minister, but the latter seemed unwilling to pay heed to an Indian journalist. 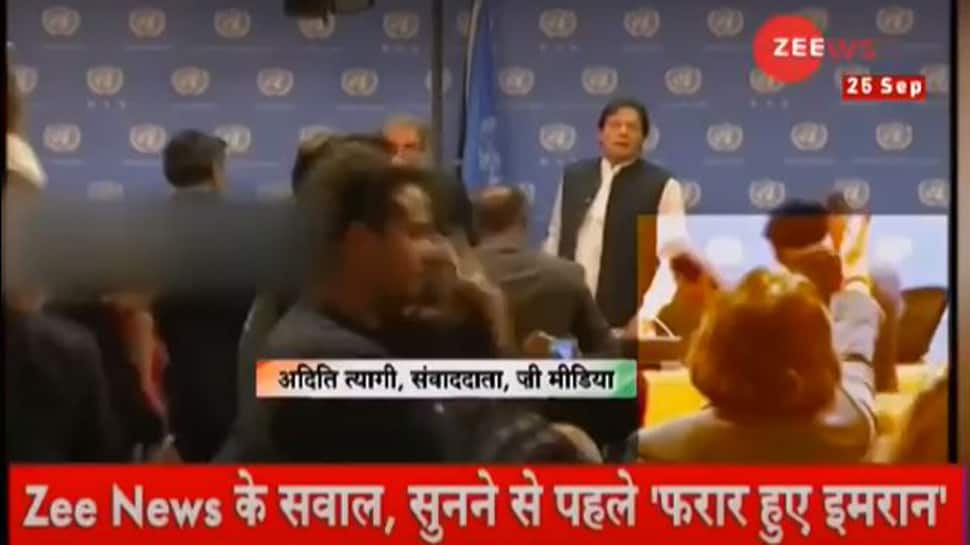 It seems that Pakistan Prime Minister Imran Khan is prepared to take only staged questions during his media interaction in the US. He prefers to evade real questions from journalists, and the same was evident when Zee News posed a question to the Pakistani premier.

Zee News journalist Aditi Tyagi repeatedly tried to ask a question to the Pakistan Prime Minister, but the latter seemed unwilling to pay heed to an Indian journalist. Hence, he preferred to ignore the Zee News journalist and walked away from the stage.

Imran Khan’s current visit to the US has often grabbed headlines for the wrong reasons.

During a joint press conference with Donald Trump on Monday, Khan was left red-faced when the US President mocked one of the Pakistani journalists, who had asked a question about India’s move to abrogate Article 370, which granted special status to Jammu and Kashmir.

The Pakistani journalist, during the joint press interaction, kept on raking up the Kashmir issue repeatedly, compelling the US President to ask, "are you from his (Imran Khan) team?"

And this was not all. After mocking the journalist, Trump directed a question to the Pakistan Prime Minister, asking, "where do you get reporters like these?"

Despite repeated attempts by the US President, the journalist continued with his anti-India rhetoric on Kashmir to which Trump told him that he was not asking a question but giving a statement. "I’ll — let me put that one down as a statement, if you don’t mind," said Trump.

Incidentally, the Pakistani news channel that was broadcasting the show suddenly stopped doing it.

Imran Khan has been on an anti-India mission during his visit to the US. In a media interaction, the Pakistani Prime Minister said that he was more concerned about the prevailing situation in India than his own country.

He urged world powers to “act before it’s late”. Targeting Prime Minister Narendra Modi-led NDA government at the Centre, Khan said that developments in India in the past six years were “frightening”.

Donald Trump in awe of PM Modi after Howdy, Modi! event, compares him to Elvis Presley