This was Mumbai Indians' third IPL trophy in 10 editions and more special for their skipper Rohit Sharma, who is the only captain to win a hat-trick of titles. Rohit has in fact won four IPL titles (one for Deccan Chargers in 2009). 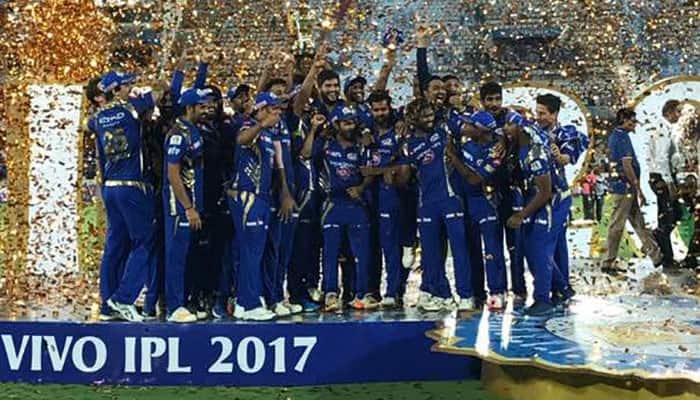 This was Mumbai Indians' third IPL trophy in 10 editions and more special for their skipper Rohit Sharma, who is the only captain to win a hat-trick of titles. Rohit has in fact won four IPL titles (one for Deccan Chargers in 2009).

For Mahendra Singh Dhoni, it was yet another final that ended in a defeat -- fifth in seven summit clashes. ( Scorecard || As it happened )

It was Johnson, who kept his nerve during the final over where 11 runs were needed. Manoj Tiwary smacked the first one to mid-wicket boundary bringing the eqaution down to 7 from 5 balls.

However the next two deliveries turned out to be disaster with both Tiwary and skipper Steve Smith (51, 50 balls) were caught in the deep.

With four required off final ball and 3 for a Super Over, Dan Christian went for an impossible 3rd run only to be run out as Mumbai players celebrated like never before.

Credit should also be given to Bumrah and Malinga for giving away only 10 runs between them in the 17th and 18th over which suddenly increased the pressure.

While the target was an easy one, it turned out to be tricky with 47 needed off the last five overs.

With Mahendra Singh Dhoni (10) at the crease in company of Smith, the Krunal Pandya over yielded 14 runs. Dhoni square cut Krunal and then Smith played a reverse pull for a six to get 14 runs off the over.

But death overs specialist Jasprit Bumrah bowled a fuller delivery inducing a thickish edge from Dhoni to bring some cheer back in the MI camp.

At the onset, Rahul Tripathi (3) got a debatable leg before decision off Bumrah's bowling but Ajinkya Rahane (44, 38 balls) and skipper Smith added 54 runs for the second wicket.

Krunal dropped a dolly at cover when Rahane, who was on 14, drove a Malinga delivery uppishly.

Since it was a small target, Rahane and Smith didn't take any undue risk during their stand that lasted 9.3 overs.

Rahane hit some crisp shots including a cover drive off Lasith Malinga and one off Krunal.

They were cruising along nicely till Rahane tried to play a chip shot off a Mitchell Johnson slower, which Kieron Pollard ran from his long-on position, diving forward to take a nice catch.

The two-time champions were completely off-colour with the willow as they played an astounding 54 dot balls (9 maiden overs) in 20 overs, a testimony to their plight.

Save Krunal (47 off 38 balls), who watched helplessly from the other end, none of the MI batsmen showed judiciousness expected on the grand stage. It was because of Krunal's late hitting (three fours and two sixes) that MI managed to reach close to 130 after being reduced to 79 for 7.

Jaydev Unadkat's (2/19 in 4 overs) dream edition just got better as he dealt twin blows in the third over removing both Parthiv Patel (4) and Lendl Simmons (3) within a space of three deliveries.

Patel mistimed a pull-shot that was taken by Shardul Thakur at mid-on while Simmons was foxed by a slower one which Unadkat smartly snapped inches off the surface.

At 8 for 2, Mumbai's most seasoned pair of skipper Rohit Sharma (24) and Ambati Rayudu (12) came together.

However they couldn't get going with Washington Sundar (0/13 in 4 overs) again proving to be exceptional during the Powerplay overs.

The 17-year-old bowled 15 dot balls in all -- bowling two in Powerplays and two during the middle overs.

Mumbai were under pressure at 16 for 2 in 5 overs before Rohit picked up Lockie Ferguson for some special treatment, hitting four boundaries to get a move on.

But it wasn't long before Rayudu was found short failing to beat Steve Smith's direct throw.

The MI skipper would be cursing himself as it was a half-tracker from Adam Zampa (2/32 in 4 overs) which he pulled to mid-wicket fence where Shardul Thakur showed fantastic balance while latching onto a well-judged catch.

Pollard (7) hit a first-ball six off Zampa but that encouraged the leggie to again flight one outside the off-stump. Pollard took the bait and as has been the case with him was taken in deep by Manoj Tiwary.

At 56 for 5, Mumbai Indians didn't have any chance of recovery. Pandya brothers have had a good tournament but on the day when it mattered most, Hardik played across the line to Dan Christian to be adjudged leg-before.

Shardul once again showed street smartness as he backed up at the striker's end after Karn Sharma's catch was missed by Christian. But his throw saw Shardul racing past Karn to dislodge the bails leaving MI shattered at 79 for 7.