IPL 2017 Final: Mumbai Indians vs Rising Pune Supergiant – Players to watch out for!

And it all squares down to one. Six weeks of intense cricketing action equates down to the blockbuster Sunday Finale between the two Maharashtrian cousins, for the fourth time this season. It is Mumbai Indians taking on Rising Pune Supergiant at Rajiv Gandhi International Stadium, Hyderabad. 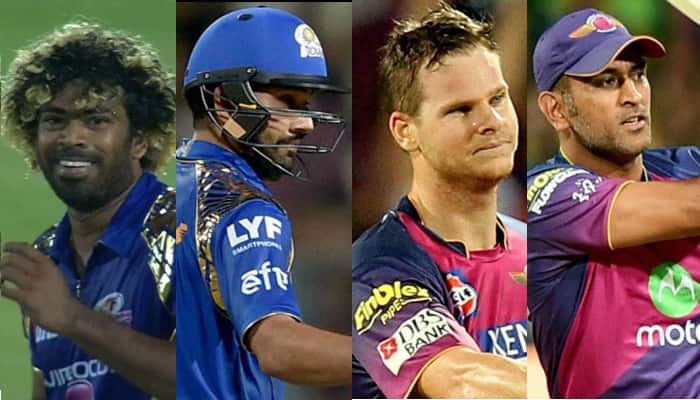 New Delhi: And it all squares down to one. Six weeks of intense cricketing action equates down to the blockbuster Sunday Finale between the two Maharashtrian cousins, for the fourth time this season. It is Mumbai Indians taking on Rising Pune Supergiant at Rajiv Gandhi International Stadium, Hyderabad. ( IPL 2017 Final – RPS vs MI: Live Blog || Full Coverage )

Rising Pune Supergiants –
Pune was never a choice for the final! At least that was the thought when RPS stumbled to successive defeats in the first half of the tournament. But few inspirational words, young guns going blazing and Ben Stokes showing his worth mid-way through and Pune stepped up and up the ladder.
Thumping down Kings XI Punjab in a virtual quarter-final and Pune registered their place at second position with the end of league stage. They once again toyed Mumbai Indians at the crucial Qualifier 1 match to take the shorter route to the final.

Rahul Tripathi was impressive throughout the league stage. However, the Pune-based batsman failed to contribute anything to the total, in the team's battle against Mumbai in the play-offs. I vow to deliver a 'Supergiant' performance in the final– was what Tripathi exclaimed when asked in an interview by IANS. Apart from that, Manoj Tiwary's consistency down the order this season has been also been Pune's strength.

Speaking about the bowlers, well, Jaydev Unadkat and Shardul Thakur have both been pretty impressive with their varying pace attack. Even the 17-year-old offie Washington Sundar has been pretty clinical with his invariable length ball deliveries, so much so that Steve Smith puts him along in the power-play overs.

What has been the problem throughout for this 'Underdog' franchise is that they have trusted too much on individual talent. Initially, it was Imran Tahir, then shfting to Ben Stokes, when he finally started carving runs of his willow. And when either parted ways on national duty, it was Jaydev Unadkat to the rescue.

Players to watch out for:
MS Dhoni: Amid speculations over his ability with the bat, Dhoni has just shown glimpses of his past form. Such was the case during the Qualifier 1, where the Ranchi-based batsman whacked 40 runs off 26 deliveries stictched through five sixes. The 35-year-old has always been sensational in the play-offs and this is probably Pune's last chance ever in the cash-rich league. He too surely will be looking ahead to end Pune's story on a 'Supergiant' note.

Steve Smith: Under the new captaincy, Pune has indeed climbed up to his best ever in two years. Last season, under Dhoni, RPS loitered down to seventh. There has been a rift between the two for the fact, but they have combined together well to lead the team through crucial passes.
As for his performance, Smith too has to been at his best this season. He surely will be looking to put some runs on the board with one final big score for his team.

Mumbai is generally the last of the lot to qualify. But surprised were their fans, when Mumbai juggernaut kept rolling and rolling to become the first team to qualify for the play-offs. Although one thing that has been an obstacle in thier path is Rising Pune Supergiant. Teased thrice in the same season, umfortunate-enough Mumbai bump into their neighbours once again, this time for hands on the title.

Skipper Rohit Sharma has had a rather rough patch this season, Nitish Rana's incredibility going down the hill mid-way through and his replacement Ambati Rayudu's failing to strike big scores at the crease — has all added up to their batting concern.

Bowling has been impressive though. Bumrah's peculiarity and Karn Sharma's deceptive googlies have come in handy when the duo combined to topple down Kolkata's top order to 106 all out.

Players to watch out for:
Rohit Sharma: Just three half centuries and that is all that has come off his bat. 309 runs is just what Rohit Sharma has scored in this topsy-turvy season of his. However, fans still hope big, they still rely on his elegancy and style and ability to outshine others in the final stage of IPL. And he surely won't let his fans down.

Lasith Malinga: He has been part of the franchise for 10 long years. Well, he is the ambassador of the team. But the much feared 'Slinger' Malinga has lost his touch. Speed has dropped, accuracy has come down, but not his believe. A gentle glimpse of it was seen with his slower length deliveries and slower yorkers. Last match, last night and last four overs off his. Expect the best.

RPS coach Stephen Fleming defends under-fire MS Dhoni, hails him as 'one of the most successful players' in IPL history