IPL 2017 Final, RPS vs MI: How Maharashtra Derby turned around to become battle between MS Dhoni and Rohit Sharma

According to cricket statisticians, Suresh Raina, Dhoni, Rohit and Ravichandran Ashwin, have all been part of six T20 fnals. And now with both RPS and MI reaching the final for the 10th season of IPL, only one between Dhoni and Rohit will shift a notch higher in terms of winners medals. 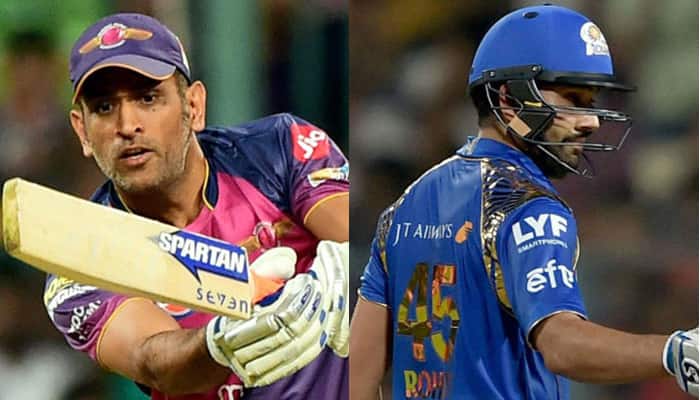 New Delhi: With the fear of pre-monsoon rain affecting the game coupled with the defeat they faced at the hands of Rising Pune Supergiant, earlier in the play-offs, Mumbai Indians displayed a splendid all-round performance to ease past Kolkata Knight Riders winning by six wickets. The win sent them blazing into their fourth Indian Premier League (IPL) final, but it will be against their nemesis Rising Pune Supergiant. Having lost to their state cousins thrice this season, much speculation is hovering over the Maharashtra derby final. But to most cricket analysts, its more of a battle between Rohit Sharma and Mahendra Singh Dhoni.

No! It is not some personal battle to worry about. It is a war of numbers, a battle between two country-mates separated by league teams on who would win the most number of T20 titles.

According to cricket statisticians, Suresh Raina, Dhoni, Rohit and Ravichandran Ashwin, have all been part of six T20 fnals. And now with both RPS and MI reaching the final for the 10th season of IPL, only one between Dhoni and Rohit will shift a notch higher in terms of winners medals.

The wicketkeeper-batsman has won the cash-rich league on two occasions – 2010 and 2011, despite having been there six times. Being part of Chennai Super Kings, the 35-year-old also won the Champions league T20 twice – 2010 and 2014. On an international level, Mahi was also part of the Indian team that clinched the World Cup T20 and the 2016 Asia Cup.

Speaking about the Mumbai Indians captain, Rohit has won the IPL finale thrice – once with Deccan Chargers in 2009 and twice with his present franchise, 2013 and 2014. Apart from that, he led the Mumbai-based team to regain their CLT20 title in 2013 too. His international trophies remain the same as that of Mahi.

Coming back to the tenth season — While Dhoni seems to have shown a glimpse of his lost spark when he smacked five sixes to score 40 off 26 deliveries against Mumbai in Qualifier 1, Rohit also has had a rather poor season at the crease. However, the latter's 26 off 24 balls, made him the only MI batsman to have crossed the 3000-run mark.

So it all sums up to the Sunday finale between the two Maharashtran neighbours, probably the last ever in the history of IPL. Will history books notify Mumbai to be Pune's bunny? Or can the Men in Blues overturn past errors to win their third title? Keep guessing until the Sunday blockbuster.