IPL 2017, Qualifier 2: Mumbai Indians vs Kolkata Knight Riders – Players to watch out for!

And by the end of tonight, the news about their final opponents will head to Rising Pune Supergiant office. Or probably, by early Saturday morning, if the rain god comes up with a cruel joke in Bengaluru, where Mumbai Indians (MI) will take on Kolkata Knight Riders (KKR) in the penultimate match of the 10th season of Indian premier League (IPL). 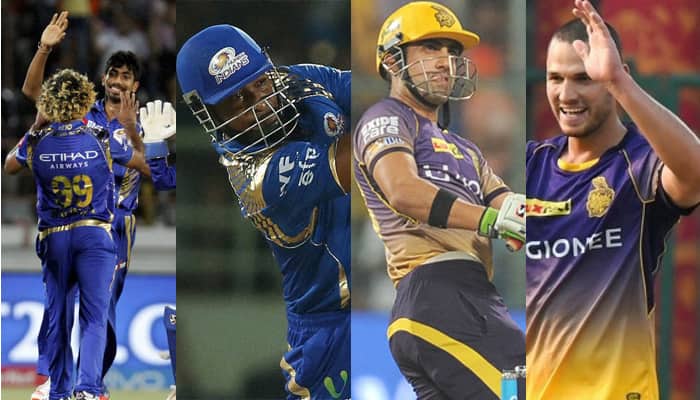 New Delhi: And by the end of tonight, the news about their final opponents will head to Rising Pune Supergiant office. Or probably, by early Saturday morning, if the rain god comes up with a cruel joke in Bengaluru, where Mumbai Indians (MI) will take on Kolkata Knight Riders (KKR) in the penultimate match of the 10th season of Indian premier League (IPL).

The usual slow starters peaked to the top of the table winning 10 off their 14 league matches. But the juggernaut from Mumbai seemed to have lost their grip towards the end of the league stage. Grabbing two victories off their last five matches and then their third successive loss to their neighbours Rising Pune Supergiant made it a concern for Rohit Sharma and his men in blues. Well, their concern has been more to with batsmen, rather than bowlers. Gambling with the line-up, coupled it with the skipper's lacklustre form, the two-time champions ceased to remain as the favourites.

KKR, on the other hand, rose from their poor form at the fag-end of the league stage to oust the defending champions Sunrisers Hyderabad on a rain-clad Chinnaswamy track. They too have started showing signs of struggle as the season progressed, but somehow crawled into the play-offs. A splendid bowling unit led by Nathan Coulter-Nile restricted the defending champions to a paltry 128, but rain had a different plan. Three hours of anxious wait and a revised target meant that KKR needed 48 off just 6 overs. Hustling and bustling, the skipper saved the day to find themselves in the Qualifier 2 against their old rivals Mumbai. Twice in the league stage, Mumbai emerged victorious.

Here are the players to watch out for...

Jasprit Bumrah: His peculiar bowling action coupled with myriad deliveries make it difficult for the batsmen to pick up the length and play the right shots. Having been mastered by 'Slinger' Lasith Malinga, Bumrah seems to have mastered the art of 'yorker' and thus has the ability to outfox the best of the lot. Even MS Dhoni took five IPL seasons to whack him off with his finishing move.

Bagging 15 wickets in 14 matches, he surely is one of the players to look out for tonight.

Kieron Pollard: The aggressive middle-order batsmen from the Carribbean has played some brutal knocks in his career. He cand send each of the deliveries over the ropes, massacring any tough bowling attack. Throughout this campaign, he has played that proverbial saviour's role to help Mumbai win crucial games.

And tonight's Qualifier 2 is just the perfect stage for the 30-year-old to show the world why is regarded as one of the best in the business.

Nathan Coulter-Nile: Injury forced him to miss half the tournament. Yet, he managed to get on to the nerves of the batsmen when he marked a return, twice in the league. He joined in late and wrecked a havoc taking 11 wickets in just 6 matches. A head injury and out for two weeks again.

In the Eliminator against the defending champions, the Aussie produced his economical best of 3/20, and a one-handed blinder to restrict SRH at a below-par 128.

Gautam Gambhir: In a nutshell, he is the pillar of KKR batting line-up. There has been quite a number of occasions when Gambhir was the only Knight, fighting it out with his willow from one end, while batsmen around him kept stumbling one-by-one from the other end. However, towards the end, he himself was struggling to score until the Eliminator, where he himself scored 32 runs of the total of 48 runs to push his side to Qualifier 2.