Needing a win today to keep their play-off hopes alive, KXIP could put up just 167 for 6 after being put into bat but they defended the total courtesy a remarkable show by their bowlers at the PCA Stadium. 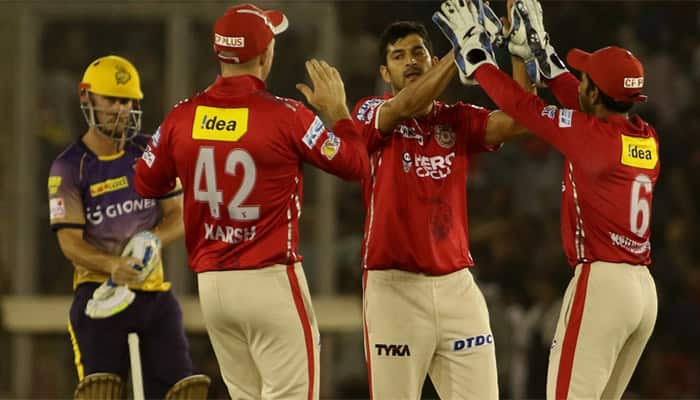 Mohali: Chris Lynn's brilliant 84 went in vain as Kings XI Punjab produced a clinical bowling show under pressure to beat Kolkata Knight Riders by 14 runs in a tense IPL match and keep themselves afloat in the T20 tournament here today.

Needing a win today to keep their play-off hopes alive, KXIP could put up just 167 for 6 after being put into bat but they defended the total courtesy a remarkable show by their bowlers at the PCA Stadium. ( Scorecard || As it happened )

The home side restricted KKR to 153 for 6 to win the match and remain in contention for a knock-out berth with 12 points from 12 matches. They are now at fifth spot in the league table.

The home side also produced a fantastic fielding performance, including a brilliant catch by Axar Patel to dismiss Robin Uthappa.

The pick of the KXIP bowlers was Rahul Tewatia who took 2 wickets for 18 runs from his two overs while Mohit Sharma got 2/24 from 3 overs. Sandeep Sharma did not take a wicket but conceded just 31 runs from his four overs.

KKR, who have already booked a play-offs berth, also remained at second spot with 16 points from 13 matches.

The visiting side made a rollicking start but lost the way later on as wickets in a heap after the KXIP bowlers put pressure by drying up the runs in the later half of run chase.

KKR began with all guns blazing with Sunil Narine and Lynn finding the runs with boundaries during the powerplay overs. But once Narine was out, the runs almost dried up though Lynn was getting the odd boundaries.

Lynn played a lone hand for KKR and none of his team- mates contributed substantially. Manish Pandey and Narine were the next highest run-getters with 18 each. Captain Gautam Gambhir scored just 8 runs.

Take away Lynn's eight fours and three sixes in his 52- ball knock, the other KKR batsmen hit just six more boundaries and a six.

KKR were 82 for 3 at the halfway stage, needing another 89 to win the match. The home side bowlers were then able to keep KKR batsmen quiet for the remainder of the match

Pressure mounted and KKR needed 50 from the final five overs but three wickets fell in a heap in seven balls in the 17th and 18th overs in the form of Manish Pandey (18), Lynn and Yusuf Pathan (2) and that ended the contest.

Earlier, Glenn Mexwell hit a quickfire 25-ball 44 as Kings XI Punjab scored 167 for 6 after being put into bat. They made a wobbly start but made a late recovery to put up a respectable total at the PCA Stadium here.

Kings XI lost wickets at regular intervals as they failed to stitch any big partnership. Their highest partnership was the 61 for the fourth wicket between Maxwell and Wriddhiman Saha (38).

Maxwell, Saha and Manan Vohra (25) got the starts but could not convert them to big scores.

Opener Vohra looked promising with a couple of fours off Sunil Narine at the start of the innings. He then hit two more boundaries off Umesh Yadav to up the ante.

But Yadav had the last laugh as he dismissed Vohra in the fifth over with his short delivery kissing the batsman's gloves for Robin Uthappa to do the rest behind the stumps.

Next over, Martin Guptill fell LBW to Narine as the batsman missed the delivery while trying to sweep over backward square leg and Kings XI were 41 for 2 then.

The home side were 42 for 2 after the powerplay overs and they were further in trouble as Shaun Marsh (11) departed after a promising start. The Australian played two delectable shots off Colin de Grandhomme, including a glorious straight drive, before he was out at Kings XI score of 56 for 3.

Marsh fell to a gem of a delivery off Chris Woakes. It was a full and straight delivery and Marsh played the line only to see it seam back in late to beat the inside edge before crashing into off stump.

Maxwell came out and he did not do much initially, scoring ones and two from his first nine balls he faced before taking his chances. He hit two consecutive sixes off de Grandhomme in the 12th over.

There was comparative lull for a couple of overs before Maxwell cut loose with two consecutive sixes off Kuldeep Yadav in the 16th over. But the same over, Maxwell was sent packing with Woakes taking a superb catch near the boundary running from long-off.

Maxwell hit one four and four sixes in his 25-ball 44.

After the captain's departure, Wriddhiman Saha was stumped while chasing a wide ball while Swapnil Singh (2) was out while going for a big shot.