The record sure belonged to both the players, but what stood out was Lynn's blistering knock – 93 not out off 41 balls with eight sixes and six fours. 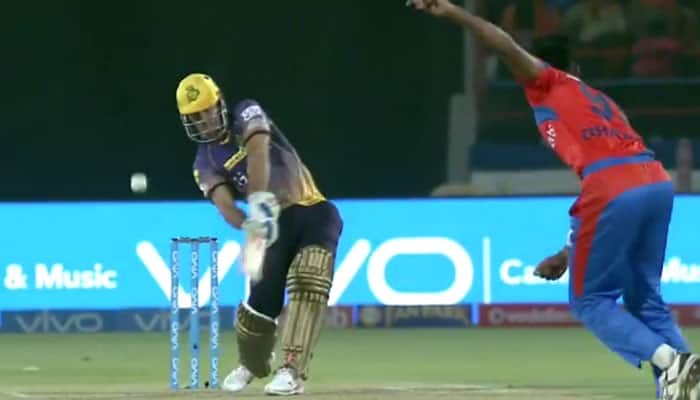 New Delhi: It was supposed to be one tight match, considering all the factors like the playing condition, the line-ups and the standard of the tournament. After all, the Indian Premier League (IPL) is world's leading tournament, and more often than not, results tend to come in the last over.

But that was not to be yesterday, when Gujarat Lions host two-time champions Kolkata Knight Riders in Rajkot. The hosts played well, rather batted well, setting a 184-run target for Gautam Gambhir & Co. Skipper Suresh Raina himself played a gem of an innings, albeit with some close calls going his way. In the process, he also went past Virat Kohli as the leading scorer in the IPL.

Then came KKR's batting. And the rest is history, as they say.

The Kolkata-based franchise tried a new opening combo, bringing Aussie all-rounder Chris Lynn with skipper Gambhir. And the pair was inseparable, literally. Both carried the bat, and on the way, set few records. But one record will last for some time, if not an eternity.

The record of chasing the biggest total without losing a wicket. All of 184 runs in the frenetic T20 world. It's an unthinkable record, both in international and club cricket. The record sure belonged to both the players, but what stood out was Lynn's blistering knock – 93 not out off 41 balls with eight sixes and six fours.

Known as Lynnsanity to his fans for obvious reasons, the 26-year-old from Brisbane, has had a habit destroying bowlers in the Big Bash League (BBL) down under. But nobody expected him to do what he did yesterday. Because, IPL is a different beast. Here, best in the business find themselves crumble to sheer pressure.

But again, if his recent form in the BBL holds any relation to his knock yesterday, then those who follow him would have seen it coming. In the BBL, he was hitting a boundary every fours balls, and there were sixes too – massive ones.

Here are some videos

Yes, the Gujarat bowling attack which was without Ravindra Jadeja and Dwayne Bravo lacked intensity and sense, but what Lynn did to the likes of Praveen Kumar, Dhawal Kulkarni, Shivil Kaushik, etc was unthinkable to say the least.

As expected, the man of the match was hailed by legends of the game. For that matter of fact, his name was one of the top trending topics these couple of days in social media.