With this victory, MI have climbed to the fourth spot while KXIP slides to the sixth spot. While MI have a great run-rate, KXIP will rue this loss as their run-rate remains in the negative. 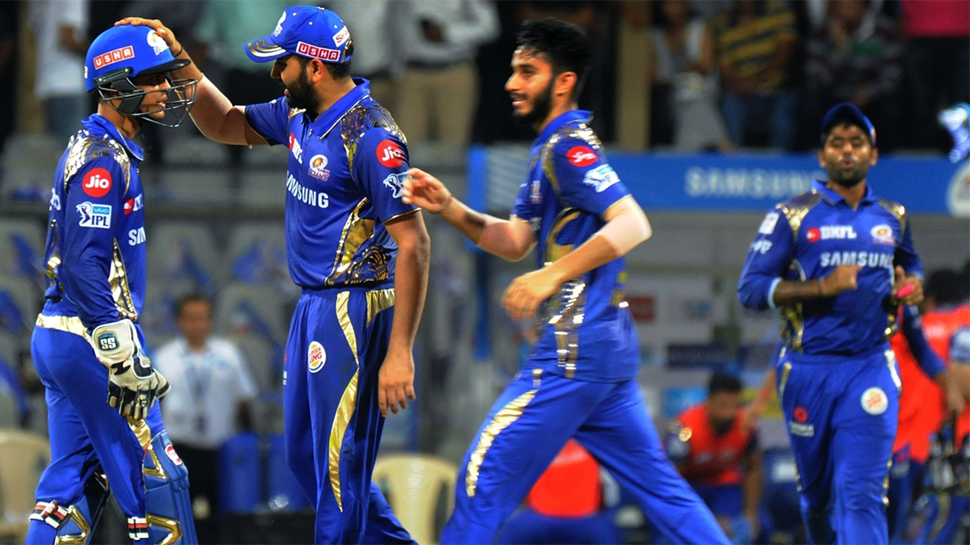 New Delhi: Till the very end and throughout the course of the match, it was Punjab who had been ruling the roost with splendid performances. However, in the tinsel town on Wednesday, the KXIP vs MI game witnessed a very bollywoodish ending to a T20 game in which the hero, in this case KXIP, got beaten at the last stride by the underdog, in this case MI. MI were on the verge of getting knocked out of the IPL and it was Jasprit Bumrah who emerged from the earth's core to pick three important wickets at the death to turn the tables on KXIP, beating them by three runs.

Bumrah's matchwinning figures of 4-0-15-3 overshadowed KXIP's Andrew Tye's 4/16 while KL Rahul's solo effort of 94 was nullified by the 50 of Kieron Pollard. The reason is simple as both MI performers revived their side from the brink. Rahul may have lead the KXIP chase but he fell near the finish line leaving his side in the lurch.

Tye couldn't have performed any better than Wednesday by giving KXIP the control early on in the MI innings but tactical errors by R Ashwin for having restricted himself into the attack cost KXIP dear as Pollard kept on cashing the medium pacers and his fifty ensured MI reached 186, which proved a winning total in the end. Ashwin did account for Pollard's scalp but had he come a little early into the attack, things might have been a lot different.

With this victory, MI have climbed to the fourth spot while KXIP slides to the sixth spot. While MI have a great run-rate, KXIP will rue this loss as their run-rate remains in the negative.

It was Bumrah who stole the show in the end. KXIP were 145/1 in 16 overs and required only 42 in 24 balls. But Bumrah struck on the very first ball by getting Aaron Finch out. He bent his back hard and made sure he bowled with pace. Three balls later, he stunned Marcus Stoinis with a measured bouncer that kissed his gloves on its way back. KXIP were suddenly pushed on the back foot and the entire weight fell on KL Rahul's shoulders.

Rahul, who had anchored the chase and innovatively went on to toy with the MI bowling, collected 12 runs in the next over to bring the equation down to 23 off 12 balls. But MI were not out yet as Bumrah was yet to bowl his final over.

He had been in this situation before and certainly had tricks up his sleeve. He bowled a wide slower on the third ball. Rahul mistimed the loft and was caught on 94 at long off. The Wankhede erupted with a boisterous cheer. They had come back to life. With an out of form Yuvraj and Axar Patel on strike, MI knew they can't lose this match from here.

With 17 required from the last six, Yuvraj flopped yet again while Axar did try his best to take the game closer. But in the end, MI took the game away in a thrilling finish.

Earlier, it was a 65-run stand between Pollard and Krunal Pandya which resurrected the MI slide and put them on course for 186. Having warmed the bench in the last few games, Kieron Pollard wouldn't have been dreaming of getting the do-or-die game against KXIP.

However, when he finally got a chance to make a comeback, he did live up to his reputation or rather his name. While hard-hitting is associated with his reputation, experience is what makes Pollard all the more special and even more dangerous. For his knock of 50 in 23 balls powered a tottering MI to reach a competitive 186.

On Wednesday, MI did climb up swiftly at the top but came tumbling down even more faster. At the end of 10th over, MI were tottering at 79/4 and the weight was on Pollard's shoulders to transport his side to calmer waters. On a usual day, MI wouldn't have found themselves in such a mess and Pollard would have been expected to fire from the word go. But against KXIP, there couldn't been a better opportunity for Pollard to prove his worth.

Having been out of form, Pollard luckily found himself in a situation when he was expected to anchor the innings. That would mean that he could have taken his time to get settled in and then shift gears.

He was batting opposite to his natural game, nurdling around for ones and twos. For the first 12 balls he played, he scored nearly run-a-ball before he moved towards leg to thump Axar Patel for a six over mid-wicket.

While you thought it could be the signal of Pollard's spark, he surprised everybody by rotating strike calmly. Actually, he knew which bowlers to target and he was looking to devour KXIP medium pacers to unleash himself. Pollard loves the ball coming at an easy pace onto the bat and bowlers such as Rajpoot and Stoinis would have been perfect preys.

Then came the time -- 13th and 14th over. It was like Pollard had been ambushing and when the right time approached, he pounced. Against Rajpoot, he 15 runs with a six and a couple of fours. Next over it was Stoinis'turn to experience his wrath. He repeated the same pattern of boundaries and reached his 50 in just 22 balls. By T20 standards, this was a quick-fire effort but in reality, it was pure batting at its best. A perfect mix of calm approach and power hitting. Alongside him, Krunal Pandya flourished and scored 32 in 23 balls.

There will be two people who wouldn't be able to sleep on Wednesday -- KL Rahul and Andrew Tye. And then there will be Jasprit Bumrah and Kieron Pollard who will have the best sleep ever, for they have infused life back into the dying MI campaign.