IPL 2018: Resurgent RCB to take on a depleted RR

Both Rajasthan Royals, who saw their batting mainstays Buttler and Stokes leave for national duty, and Royal Challengers Bangalore will also have an eye on the net run rate, which could be decisive if more than one team finish with equal number of points. 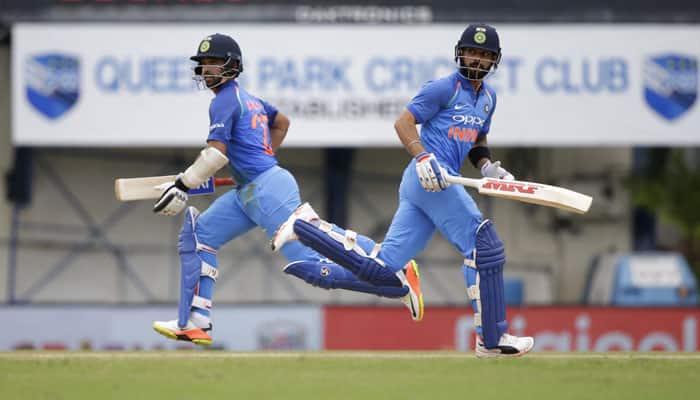 Jaipur: Weakened by the departure of Jos Buttler and Ben Stokes, Rajasthan Royals will have their task cut out when they lock horns with a resurgent Royal Challengers Bangalore, in the Indian Premier League.

The game at the Sawai Mansingh Stadium is crucial for both RR and RCB, placed fifth and sixth in the table respectively. As the race for playoffs heats up, five teams are in with a chance to make the cut. Chennai Super Kings and Sunrisers Hyderabad are already through to the playoffs, leaving RR, RCB, Kings XI Punjab, Mumbai Indians and Kolkata Knight Riders to fight for the remaining two places.

Both Rajasthan Royals, who saw their batting mainstays Buttler and Stokes leave for national duty, and Royal Challengers Bangalore will also have an eye on the net run rate, which could be decisive if more than one team finish with equal number of points.

The momentum for now is with the visitors, whose campaign witnessed a resurgence following a 14-run win over Sunrisers Hyderabad last night. Virat Kohli and his men have certain flaws to iron out but they have the momentum, confidence and also the resources to prevail over the hosts.

The visitors have a formidable batting line-up in Kohli, AB de Viliers, Parthiv Patel, Manjeet Singh and also Moeen Ali, who was drafted into the scheme of things rather late but justified his inclusion with impressive performances, the latest being his 34-ball 65 against SRH.

RCB's bowlers struggled to contain Kane Williamson and Manish Pandey, who added 135 runs in 65 balls for the third wicket and almost saw the Sunrisers home. The likes of Umesh Yadav and Tim Southee, though, have the pace to trouble most batsmen and the spin department, led by Yuzvendra Chahal, provide variety to their attack.

With three consecutive victories against Delhi Daredevils, Kings XI Punjab and SRH under their belt, the visitors have the winning momentum with them. On the other hand, Rajasthan Royals might take heart out of the fact that they are back on home turf and also because they had beaten RCB in their backyard earlier in the tournament.

Besides Buttler and Stokes, team mentor Shane Warne will also not be there in the RR dugout. The batting, in the absence of Buttler, who had hit five consecutive fifties in his last six games, looks vulnerable because skipper Ajinkya Rahane has not been in the best of form.

Uncharacteristically, Rahane has often thrown his wicket away while going for unconventional shots. Sanju Samson has a 45-ball 92 to his credit this IPL, but he too has not fired lately. The rest of the batsmen such as Rahul Tripathi, Stuart Binny, DJM Short and Jofra Archer have not lived up to the expectations.

The bowling too lacks depth with Archer being the only one who has made some impression. Jaydev Unadkat, Dhawal Kulkarni and K Gowtham have proved ineffective.

IPL 2018: CSK look to strengthen position when they take on DD